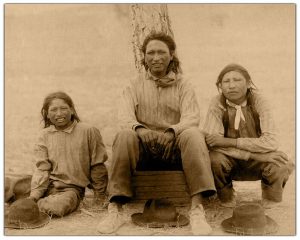 There is this law called the Indian Child Welfare Act which, along with providing necessary protections, also helped kill the practice of tearing apart Indian families and putting their kids in boarding schools. Sounds like an obvious idea, right? It’s somewhat surprising that it was only enacted in 1978. Would you also be surprised to learn that some people are trying to overthrow that law?

It’s being challenged in child custody cases, with people actually saying that no, it is wrong to try and keep children with their relatives or their tribe, and their reasoning is unbelievable.

So a U.S. federal district judge did exactly that. He … a radical conservative judge in Texas. And he took the Indian Child Welfare Act and he checked it out the window and said that it was racial discrimination.

That’s their argument: that a law to protect an oppressed minority is racist. That’s rich, coming from a radical conservative, the kind of person who wants to preserve the privilege that maintains a white majority rule. He doesn’t care about racism, except when brown people get uppity.

What’s worrisome is that the decision was appealed all the way to the 5th Circuit Court of Appeals, and they split.

They strike down a few narrow parts of the law, but that 16 judge panel was evenly split on whether basically the foundation of the legal status of tribes is constitutional. And so that’s how close we are to a scary result in this case. And I think that we’ll have to see what the Supreme Court will do. But it’s terrifying to think that the Supreme Court is going to take it up and all federal Indian law is on the table.

I wonder how many Trump appointees were involved. The Republicans have been doing their best to pack the courts. I wonder who could possibly want to strike down the ICWA, and it’s “private adoption attorneys, corporate lawyers and this universe of right-wing money and operatives”.

It always astonishes me, a professor at a college with a student body that is about 20% Indian, how much discrimination goes on in the communities around me — discrimination that is almost entirely invisible to me, and it’s disturbing when it rises up where an oblivious old white dude can see it.

Here’s another story, from Nebraska, in which busybodies in a public school decided to cut Lakota kids’ hair in the name of searching for lice. What gets me is all these white ranchers defending the school secretary who took it upon herself to hack at the kids’ hair (they didn’t have lice, by the way). She’s a nice lady, they say, she didn’t mean any harm, “She did it to help the children and keep the school safe”, etc. I don’t believe it. My particular culture doesn’t attach the kind of importance to long hair that the Lakota do, and if some school official had taken scissors to my kids’ hair, I would have marched to the school district office in a rage and demanded that they be fired. You don’t get to make those kinds of decisions for my children, they have more autonomy than that.

It’s an act that doesn’t have the historical resonance it does for the Lakota, so I can only imagine a fraction the anger it would generate.

As the story circulated on social media, raw emotions surfaced. Grandparents shared stories of how their hair had been cut in boarding schools decades ago.

“Having the seventh, eighth, tenth generation having to go through it again … I mean, it’s just a big eye opener because it’s being re-lived,” LeRoy said.

On March 3, 1819, nearly 201 years to the day before the children’s hair was cut, the United States signed the Civilization Fund Act. That ushered in an era from 1860 to 1978 when boarding schools nationwide, including in Nebraska, separated Native children from their families, punished them for speaking their language, and often cut their long hair.

“… All the Indian there is in the race should be dead. Kill the Indian in him, and save the man,” Capt. Richard H. Pratt, who founded the Carlisle Indian Industrial School, famously said in 1892.

In 1884, Christian missionaries came to South Dakota’s Yankton Reservation and took eight-year-old Zitkála-Šá from her mother.

“I remember being dragged out, though I resisted by kicking and scratching wildly,” Zitkála-Šá wrote in 1900 of her hair cutting. “In spite of myself, I was carried downstairs and tied fast in a chair. I cried aloud, shaking my head all the while until I felt the cold blades of the scissors against my neck, and heard them gnaw off one of my thick braids. Then I lost my spirit…now I was only one of many little animals driven by a herder.”

Are we really going to be fooled by a bunch of racists who cry that it’s racist to interfere with their racism?

That seems mean » « The dilemma