Oh no! Teenagers might see this fully clothed woman walking and talking like a normal human being, who also takes off all of her clothes and has sex with other people outside the con, apparently unlike any other woman in attendance. So Nicholas Fuentes and his groypers spotted this, and because they already hate Charlie Kirk, they shrieked and pointed. 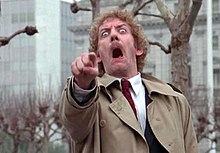 Of course Kirk caved and disinvited her.

We regret to inform you that your SAS 2021 invitation has been revoked, an email from TPUSA stated, posted to Twitter by the adult entertainer. This decision is final. This revocation does not impact application to future events, and we hope that you will consider applying again in the future.

However, Love wasn’t buying it and said the Republican Party is “broken” due to TPUSA officials giving her the boot. “Can’t make this shit up lol!! I just watched Charlie Kirk, Dan Bongino, Rick Scott, Kat Timpf, speak about freedom, censorship, how inclusive the ‘movement’ is,” she stated. “And then they had me thrown out of the Turning Point USA conference. The Republican Party is broken.”