Ken Ham wants to expand his Ark Park with a Tower of Babel.

A Bible-themed attraction in Kentucky that features a 510-foot-long wooden Noah’s ark is planning to begin fundraising for an expansion.

The Ark Encounter said Wednesday that it would take about three years to research, plan and build a “Tower of Babel” attraction on the park’s grounds in Northern Kentucky.

A release from the Ark Encounter park said the new attraction will “tackle the racism issue” by helping visitors “understand how genetics research and the Bible confirm the origin of all people groups around the world.” No other details were given on the Babel attraction or what it might look like.

No. Genetics research confirms that human beings are far older than 6,000 years, and that we are not all descended from a single family of 8 people 4500 years ago. If you’re going to pretend to have the authority of modern genetics, you have to accept that genetics refutes the fundamental young earth claims of the Bible literalists (as does physics, geology, archaeology, history, etc., etc., etc.).

The important part of that story is the “three years to research” nonsense. It won’t take that long, because there’s nothing to research. Here’s the whole of the Babel story from Genesis 11 — literally. I’m quoting the entire goddamn thing.

Now the whole world had one language and a common speech. 2 As people moved eastward, they found a plain in Shinar and settled there.

3 They said to each other, “Come, let’s make bricks and bake them thoroughly.” They used brick instead of stone, and tar for mortar. 4 Then they said, “Come, let us build ourselves a city, with a tower that reaches to the heavens, so that we may make a name for ourselves; otherwise we will be scattered over the face of the whole earth.”

5 But the Lord came down to see the city and the tower the people were building. 6 The Lord said, “If as one people speaking the same language they have begun to do this, then nothing they plan to do will be impossible for them. 7 Come, let us go down and confuse their language so they will not understand each other.”

There. Research done. They made a tower of unknown dimensions out of brick, with tar for mortar. Ham and company will just make up some dimensions, and I guarantee you it won’t be made of brick and tar, and it won’t be tall enough to reach the heavens. They could save themselves a lot of work and just paint a pretty poster or a diorama, like most of what they have in their ark.

Oh. They’ve already got one. 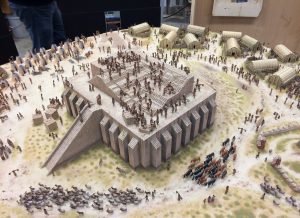 It’s not very impressive for a structure that enraged a god, but OK, the research is done. There’s the scale model, just make it bigger. Think that will appeal to the rubes?

They aren’t going to do Bible scholarship, or serious archaeological research, or anything legitimately worthwhile. They’re going to be “researching” theme park organizations, and most importantly, they’re going to be fundraising. This Babel thing is all about keeping the grift going, fueling their money-raising efforts, and nothing more.

Rob Boston has them pegged.

During a recent interview with a Grant County newspaper, Ham talked about his plans to add a Tower of Babel to the park. This attraction, based on a story that appears in Genesis 11:1-9, will explain Ham’s view of how we ended up with so many languages. Bottom line: Look for more bad science. (Remember, folks, creationism is about more than just claims that the Earth is only 6,000 years old, humans and dinosaurs existed at the same time, the Grand Canyon is the result of the massive flood described in the Bible, etc. It’s a comprehensive, unscientific worldview that addresses, well, everything.)

I recently received a press release from a PR agency Ham hired to blast the media with happy stories about his big boat. In the release, Ham carped that he’s had to work hard to respond to “the rumor that state money was used to build and open the Ark Encounter.”

That’s not a rumor, it’s a fact. Journalists, bloggers and Americans United have compiled entire lists of the forms of taxpayer support Ark Encounter received. But wait, there’s more! Ark Encounter received between $1 million and $2 million in federal aid under the original COVID-19 relief bill’s Paycheck Protection Program (PPP). Blogger Hemant Mehta noted that even as Ham was pulling in a hefty PPP loan – which is really a grant because the federal government plans to forgive most of it – he was sending emails to supporters begging for contributions to save the Ark Park.

To recap: Ham built the Ark Park on the backs of Kentucky taxpayers. He denied jobs to anyone who failed to agree with him on religion. He stuck it to a small town that had been wowed by Ham’s tales of an economic turnaround. These are inconvenient facts he continually denies.

That’s another component of their three year plan: it’s going to take time to tease so much more money out of the state legislature and local civic groups. It’s not about truth, or affirming the faith, or educating the citizenry, or reconciling science and religion — it’s about Mammon.

An accurate summary of the space-billionaire pathology » « Darn, he came back