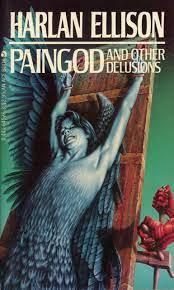 I’ve been thinking about pain, a litte bit, lately. It’s an interesting question, whether humans are unique in their perception of pain compared to other animals, and I used to have to deal with it fairly frequently because, for a few years, I specifically studied sensory pathways in fish. Even larval fish are surrounded with a tight mesh of sensory processes, with a substantial spinal pathway that shuttles information up the fish’s brain, and so when some local fisherman asks if fish feel pain when they’re hooked, I’d answer “You betcha. Lots of sensory fibers in the face and jaws of fish.”

But then someone would come along and tell me no, they don’t. Pain needs a consciousness to be felt, so while we may rip and tear neurons that mediate the peripheral sensation of pain, they aren’t aware of a feeling of pain. They’re just meat robots.

I’d usually give up at this point, because my next argument would be, “But then, humans are just meat robots. Do you deny that humans feel true pain?” And then we’re off into philosophy and I’d rather talk about neurons.

Recently I learned that one (actually, several luminaries) have been arguing that other animals don’t feel pain. It’s a rather bizarre argument, made to justify inflicting pain on animals rather than a sincere attempt to argue from the evidence, and it’s from…William Lane Craig! People take him seriously? I guess so.

Anyway, Craig is troubled by a theological problem. Do animals feel pain? But why? Were they subject to problems cause by The Fall? But the bunnies and the fishies didn’t nibble on the apple, so why would a just god make them suffer for Eve’s mistake?

Craig proposes a few explanations. The first I’ll mention and dismiss because it is stupid.

…we must consider this question: “What is the supposed connection between Adam’s Fall and animal pain?” A number of answers have been proposed. But they all boil down to roughly one of two explanations: either (1) by sinning Adam and his ancestors surrendered their role as stewards of the animals and thereby surrendered them to the wiles of nature, or (2) the very act of Adam’s sin sent shock waves through creation that transformed animals, which formerly could not feel pain, into pain wracked predators and prey. In either case, however, it is hard to see why God would have made the integrity and well-being of nature, and of the innocent creatures in it, susceptible to the faithful obedience of humans (an obedience God knew they would not sustain). Why was nature made so very fragile in this way? Is not that fragility itself a defect (or evil) in creation?

Just so you know, Craig is an old earth creationist, although to be honest, I don’t think he thinks about the chronology very deeply. So according his reasoning here, until humans defied god and ate some fruit, an event that happened sometime in the last hundred thousand years, all animals lived in peaceful coexistence, and there was no pain in the world until that relatively recent sin turned them into “pain wracked predators and prey”. That implies that there were no predators and prey for the first four billion years plus of the Earth, and that everything was just snuggle-bunnies during the Cretaceous, but I’ll just punt on this argument because, like I said, Craig doesn’t think very deeply about his explanations, doesn’t understand biology or ecology (were there no food webs in the Garden of Eden?), and would probably happily ditch this entire line of argumentation as it got him deeper and deeper into trouble.

He’s also taking as his premise the idea that nature was purposefully created by a benevolent god, and that by golly, god wouldn’t be so mean as to intentionally inflict the ability to suffer on his creation. I don’t see any reason to accept that; why not instead assume a malevolent god who made sure Adam had creature-victims he could torment and make squeal and squirm? A lot of what his god does seems to be all about causing agony, they needed to be able to feel pain for him to have any fun.

The more interesting argument he makes is this one:

A second (though unpopular) response to this problem is to deny that animal pain and suffering is real or morally relevant. Most will react to this response with incredulity: “Isn’t it just obvious that some animals experience pain and suffering?” The answer to that question is yes and no. We do think it an item of common sense that animals experience pain and suffering. But the scientific evidence for this is not as strong as you might think. Of course, scientists all acknowledge that many animals display behaviors that make it look like they are in pain. But that is not good enough. To see why, consider the phenomenon of “blindsight.” Patients with blindsight claim to be blind, and yet are at the same time able to point to objects and, in some cases, catch balls–something they could only do if they could in fact see. So are they blind or not? Well, it depends on what you mean by “sight.” They can see in the sense that they can use visual information to regulate their behavior. But they are not consciously aware of the fact that they can do this.

When it comes to pain, then, the question is: might the behaviors that we associate with animals that look to be in pain constitute something like “blindpain”–showing all the behavioral symptoms of real pain, but without the conscious awareness? Amazingly, given what we know about the functioning of the brain, the answer might be yes. Those parts of the brain most closely associated with consciousness of pain, are also the parts that were the last to arrive among mammals: the pre-frontal cortex.

So animals exhibit the superficial symptoms of pain, but experience none of the deeper, crueler feelings of pain. It’s sensation without awareness. You can go ahead and kick a kitten, and while it might exhibit all the superficial behaviors of pain, like bleeding, or limping, or mewing, or just lying there in a lump of broken bones whimpering, deep down inside the kitty consciousness it’s not feeling a thing. He later argues that they express a simulacrum of pain sensation useful for avoiding danger in their environment, but that’s not the same thing as actually being aware of the phenomenon of pain.

Which had me thinking of Chinese rooms and Turing tests. Could William Lane Craig convince me that he truly feels pain? If he were strapped to a gurney and I was given leave to artfully apply a razor blade to his body, what would he do to prove he was really suffering, deep down? I’m sorry, the screaming sounds like an artifice to me, a ploy to get me to stop slicing, but hey, could he do better than a kitten to persuade me to stop torturing? I don’t think so. If I were a psychopath, I could make Craig’s same argument — the expression of pain is not the same as the perception of pain, allowing me to go on a bloody rampage with all the local pets, and work my way up to torturing human beings because, after all, they’re just meat machines with some reflexes and patterned behaviors they learned from watching horror movies. My victims aren’t really suffering, because they’re not truly aware. Unlike me.

Let me reassure you that I have no interest in torturing anyone or anything, because I reject Craig’s proposal. I think all animals, including us, can experience pain and also degrees of conscious awareness. I couldn’t torture a kitten or WLC without feeling their struggles are an expression of a deeper experience that I would share if I were in their position.

Craig is about to dive into an argument from brain anatomy, which I despise even more than his other arguments. It’s a bogus claim based on an ignorance of neuroanatomy and a failure to understand the flexibility and plasticity of brains — they’re not as dependent on the kind of extreme modularity he wants to propose. It’s a kind of neurological reductionism that I don’t find at all credible.

Unfortunately, I’ll have to explain all that later. My CPU is going all fuzzy because the drugs I’m taking to alleviate peripheral pain are mucking everything up — it took me hours to type out this short post and I think my eyeballs are roaming around looking for an escape route. Later? Tomorrow? Once my brain stops idling? I’ll type up some more. Until then, I’ll leave it to you commenters to take on WLC.

(I should add that I do find his idea of “blindpain” interesting, I just don’t think it can hold up.)