Do Christians get the funny drilled out of them? I ask because I recently got this ad from Ray Comfort: 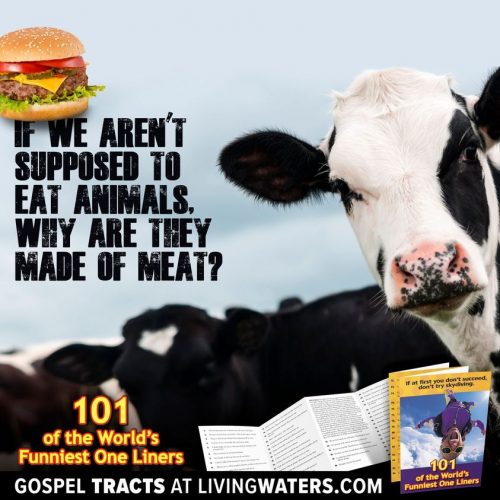 Don’t try to analyze it. It’s about as funny as a fart, which means you have to be in a certain state of mind to be amused, and even then, it’s not going to be a clever joke, let alone one of the “world’s funniest one-liners”. It’s just part of the Living Waters grift — you can buy the booklet for $10, which is probably almost entirely profit for Ray, especially since buying it would immediately put you on his mailing list of gullible people.

Oh, also, he gives the content away for free! The ordering info includes the complete text, which is nice. There isn’t much that’s funny in there, though.

101 of the World’s Funniest One Liners

1. Ninety-nine percent of lawyers give the rest a bad name.
2. Borrow money from a pessimist — they don’t expect it back.
3. Time is what keeps things from happening all at once.
4. Lottery: A tax on people who are bad at math.
5. I didn’t fight my way to the top of the food chain to be a vegetarian.
6. Never answer an anonymous letter.
7. It’s lonely at the top; but you do eat better.
8. I don’t suffer from insanity; I enjoy every minute of it.
9. Always go to other people’s funerals, or they won’t go to yours.
10. Few women admit their age; few men act it.
11. If we aren’t supposed to eat animals, why are they made with meat?
12. No one is listening until you make a mistake.
13. Give me ambiguity or give me something else.
14. We have enough youth. How about a fountain of “Smart”?
15. He who laughs last thinks slowest.
16. Campers: Nature’s way of feeding mosquitoes.
17. Always remember that you are unique; just like everyone else.
18. Consciousness: That annoying time between naps.
19. There are three kinds of people: Those who can count and those who can’t.
20. Why is “abbreviation” such a long word?
21. Nuke the Whales.
22. I started out with nothing and I still have most of it.
23. Change is inevitable, except from a vending machine.
24. Out of my mind. Back in five minutes.
25. A clear conscience is usually the sign of a bad memory.
26. As long as there are tests, there will be prayer in public schools.
27. Laugh alone and the world thinks you’re an idiot.
28. Sometimes I wake up grumpy; other times I let her sleep.
29. The severity of the itch is inversely proportional to the ability to reach it.
30. You can’t have everything; where would you put it?
31. I took an IQ test and the results were negative.
32. Okay, who stopped the payment on my reality check?

Editorial: Probably the most thought-provoking one-liner is “Eat right. Stay fit. Die anyway.” It’s sad but true — no matter what you do, you will die. This is because you have sinned against God. Let’s see if that’s true: Have you ever lied (even once)? Ever stolen (anything)? Jesus said, “Whoever looks upon a woman to lust after her, has committed adultery already with her in his heart.” Ever looked with lust? If you have said “Yes” to these three questions, by your own admission, you are a lying, thieving, adulterer at heart; and we’ve only looked at three of the Ten Commandments. How will you do on Judgment Day? Will you be innocent or guilty? You know that you will be guilty, and end up in Hell. That’s not God’s will. He provided a way for you to be forgiven. He sent His Son to take your punishment: “God commended His love toward us, in that, while we were yet sinners, Christ died for us.” Jesus then rose from the dead and defeated death. God promises everlasting life to all those who confess and forsake their sins, and trust in Jesus Christ. Please do that today . . . you may not have tomorrow. See John 14:21 for a wonderful promise. Then read the Bible daily and obey what you read. God will never let you down.

33. We are born naked, wet and hungry. Then things get worse.
34. 42.7 percent of all statistics are made up on the spot.
35. Be nice to your kids. They’ll choose your nursing home.
36. If at first you don’t succeed, destroy all evidence that you tried.
37. I wonder how much deeper the ocean would be without sponges.
38. Eat right. Stay fit. Die anyway.
39. My mind is like a steel trap, rusty and illegal in 37 states.
40. Nothing is fool proof to a sufficiently talented fool.
41. On the other hand, you have different fingers.
42. I’ve only been wrong once, and that’s when I thought I was wrong.
43. God made mankind. Sin made him evil.
44. I don’t find it hard to meet expenses. They’re everywhere.
45. I just let my mind wander, and it didn’t come back.
46. Don’t steal. The government hates competition.
47. Humpty Dumpty was pushed.
48. National Atheist’s Day April 1st.
49. All generalizations are false.
50. The more people I meet, the more I like my dog.
51. Work is for people who don’t know how to fish.
52. If you don’t like the news, go out and make some.
53. For every action there is an equal and opposite criticism.
54. IRS: We’ve got what it takes to take what you have got.
55. I’m out of bed and dressed. What more do you want?
56. I used to think I was indecisive, but now I’m not too sure.
57. I can handle pain until it hurts.
58. No matter where you go, you’re there.
59. If everything is coming your way, then you’re in the wrong lane.
60. It’s been Monday all week.
61. Gravity always gets me down.
62. This statement is false.
63. Eschew obfuscation.
64. They told me I was gullible…and I believed them.
65. It’s bad luck to be superstitious.
66. According to my best recollection, I don’t remember.
67. The word “gullible” isn’t in the dictionary.
68. Honk if you like peace and quiet.
69. The Big Bang Theory: God Spoke and BANG! it happened.
70. Atheism is a non-prophet organization.
71. Despite the cost of living, have you noticed how it remains so popular?
72. Save the whales. Collect the whole set.
73. A day without sunshine is like, night.
74. The early bird gets the worm, but the second mouse gets the cheese.
75. Corduroy pillows: They’re making headlines!
76. Gravity: It’s not just a good idea, it’s the LAW!
77. Life is too complicated in the morning.
78. We are all part of the ultimate statistic — ten out of ten die.
79. Nobody’s perfect. I’m a nobody.
80. Ask me about my vow of silence.
81. The hardness of butter is directly proportional to the softness of the bread.
82. The last thing on earth you want to do will be the last thing you do.
83. Diplomacy is the art of letting someone else get your way.
84. If ignorance is bliss, then tourists are in a constant state of euphoria.
85. If at first you don’t succeed, don’t try skydiving.
86. If Barbie is so popular, why do you have to buy her friends?
87. Stop repeat offenders. Don’t re-elect them!
88. I intend to live forever. So far so good.
89. Who is “General Failure” and why is he reading my hard disk?
90. What happens if you get scared half to death twice?
91. I used to have an open mind but my brains kept falling out.
92. Energizer Bunny arrested; charged with battery.
93. I didn’t use to finish sentences, but now I
94. I’ve had amnesia as long as I can remember.
95. Bills travel through the mail at twice the speed of checks.
96. Vacation begins when Dad says, “I know a short cut.”
97. Evolution: True science fiction.
98. What’s another word for “thesaurus”?
99. Everywhere is walking distance if you have the time.
100. A flashlight is a case for holding dead batteries.
101. I went to the fights, and a hockey game broke out.
. . . Don’t forget to read the editorial!

He doesn’t even include his very best joke! 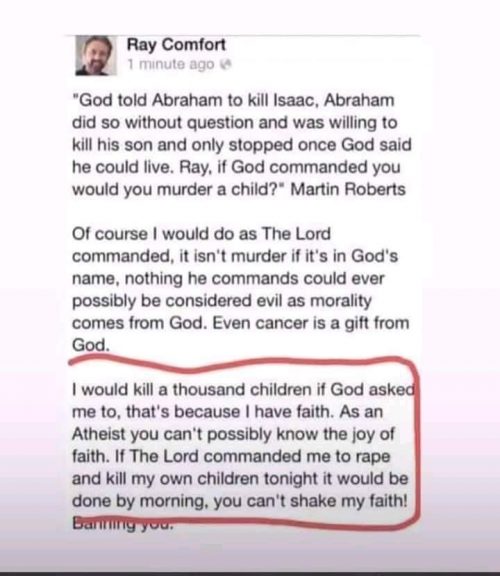 Man, Christians can be scary people. How does he know what God says? If you snuck into his house and wired his bed with hidden speakers that whispered unspeakable suggestions to him all night, you could get him to do some very scary shit. I also hope he never gets schizophrenia.

Sometimes you have to shut up and listen » « Spider jump scares