It’s good to get the Portuguese perspective on something I wrote about Portugal.

I am writing to you from Portugal. As you may imagine, this has to do
with your Pharyngula post “We could be another Portugal!”. I thought
that you might find interesting the attached cartoon. It was published
in an underground newspaper in 1934, that is, at a time in which Salazar
had been prime minister for only two years. It shows him teaching Hitler
and Mussolini how to deal with the opposition. One might think that it
happened to be a Communist newspaper, but no; it was a Republican
newspaper (in the sense of Republican values, not in the sense of the
American Republican Party). 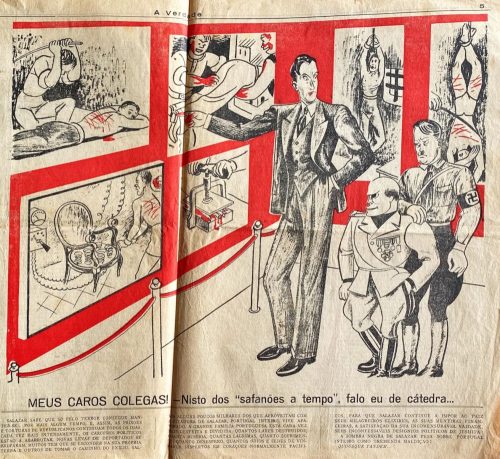 That’s the kind of man American conservatives want to run the country. Yikes.

As was brought up in that other thread, we aren’t even talking about Salazar’s terrible colonial abuses yet.

I wouldn’t want to be a funeral director right now » « So, Hadrian’s Wall stops transphobia, too?