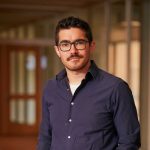 Hey Josh! Good to see you in the news for the right thing!

Joshua Preston was a former student here at UMM, and he’s in the National Guard, and he spoke out against the lackluster response of the military leadership to the attempted insurrection.

A Minnesota National Guard soldier, after being nudged to remove a Facebook post that criticized the Guard for a tepid public response to last week’s insurrection at the U.S. Capitol, is raising questions with leadership about how the organization roots out right-wing extremism within its own ranks.

The soldier is also questioning how the military conflates nonpartisan speech with apolitical speech.

Spc. Joshua Preston of Minneapolis, a 30-year-old attorney and soldier in the Minnesota National Guard’s 2nd Combined Arms Battalion, 136th Infantry, was upset when the first statement to come from leadership after the Jan. 6 violence in Washington, D.C., was a vague reminder that service members “must remain apolitical.” He was particularly upset that leadership referred to the coup attempt only as “the timely events occurring on the national stage.”

He thought the organization should have been more forceful in its stand against the attempted coup.

Preston posted a Facebook response that Guard leadership should root out right-wing extremism in its own ranks. He was later contacted by a commander bringing up concerns about the post, though leadership did not officially order him to take it down.

I am proud to have taught him a little biology here.