Those catastrophic hijinks atop the telescope, and the explosions, couldn’t have been good for the structure. 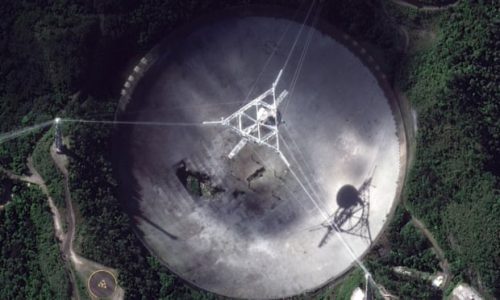 A huge radio telescope in Puerto Rico that has played a key role in astronomical discoveries for more than half a century collapsed on Tuesday, officials said.

The telescope’s 900-ton receiver platform fell onto the reflector dish more than 400 feet below.

The US National Science Foundation had earlier announced that the Arecibo Observatory would be closed. An auxiliary cable snapped in August, causing a 100ft gash on the 1,000ft-wide (305m) reflector dish and damaged the receiver platform that hung above it. Then a main cable broke in early November.

Rather than blaming Sean Bean, though, I should note that this is another example of the decay of our scientific infrastructure on Donald Trump’s watch. You don’t he really cares about a radio telescope, or Puerto Rico, do you?