Oreo has come out with rainbow colored cookies. I hear the commercial is positive and heartwarming and appreciative of the LGBT community, but I haven’t seen it, so I’ll just have to trust the buzz. 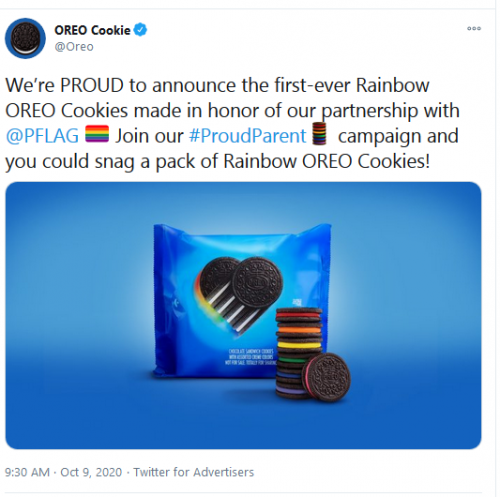 That’s nice, but I’m not in the market for cookies myself. If I were, I’d probably like them, although they do look a bit garish. The one thing I wouldn’t do is regard them as a sign of the collapse of civilization. But then, I’m not Rod Dreher.

At least there’s a sensible take on that.

Yes, Rod sees a corporate decision to monetize apparent support for queer people and their hetero friends and family as a totalitarian act of revolution (???) because his movement demands that adherents be mad about something at all times.

But that something can’t be anything a normal person would get mad about. Normal people look at this and think “Where can I get some?” or perhaps “Yuck, Oreos.” They do not think totalitarianism or revolution because even if they are assholes, they aren’t assholes who have nothing better to do except Be Mad.

As an aside, I’m still torn by corporatized queerness. Yes, I know that this is driven by the desire to increase revenue and the production or sale of rainbow colored items is no guarantee that a company treats its own queer employees with respect. But, I’m old enough to remember the before times so I still think it is nifty.

Also, it makes dimwits like Rod beclown themselves, and that’s never a bad thing.

There are lots of things that are not marketed for me: sports video games, bass fishing boats, accordions, toupees, MAGA hats. They’re fine. You want one, go ahead, but please don’t pretend the people making those products love you personally. I’ll just shrug and move on.

One exception: if you’re trying to sell me on the weird religious opinions of a conservative dingleberry, I’ll say “Yuck, Dreher” and cuss you out.

Contemplate the past and how you got here » « Well all right then, Pennsylvania