Matt Taibbi used to be one of my favorite writers, but then I learned about his ugly misogyny (which he unconvincingly claimed was made up), and I was never able to look at his work in the same way. So I cancelled him. By which I mean I stopped reading him. Apparently he has sensed the declining number of eyeballs gazing at his writing, and the fading number of tongues wagging his praises, because he is mad about it, and I had to read something new of his. I am disappointed even more.

It’s the usual spittle-flecked screed we usually see from disgruntled right-wingers, with but one message: the Left is just as bad as the Right! They’re all prudish, finger-wagging authoritarians at heart, but the Lefties are just the worst! We can’t even discuss how stupid the Left is, he says as he writes about how stupid the Left is, because they’ll descend on us with great force and crush us!

Doing so would have meant opening the floodgates on a story most everyone in media sees but no one is allowed to comment upon: that the political right and left in America have traded villainous cultural pathologies. Things we once despised about the right have been amplified a thousand-fold on the flip.

That he can claim this in the era of Trump, when badgeless cops in unmarked cars are grabbing civilians off the street, when cops are maiming citizens with rubber bullets and truncheons and pepper guns, when our president openly considers not respecting the outcome of the next election, is weird and dumb. The old Taibbi had sharp perceptions; this one seems blinded with resentment that his good ol’ boy rape fictions have damaged his reputation.

The centerpiece of his gripe with the Left is a tweet by Byron York (yeah, NRO York, far right apologist for every one of Trump’s excesses), which mocked the National Museum of African American History and Culture for producing this graphic: 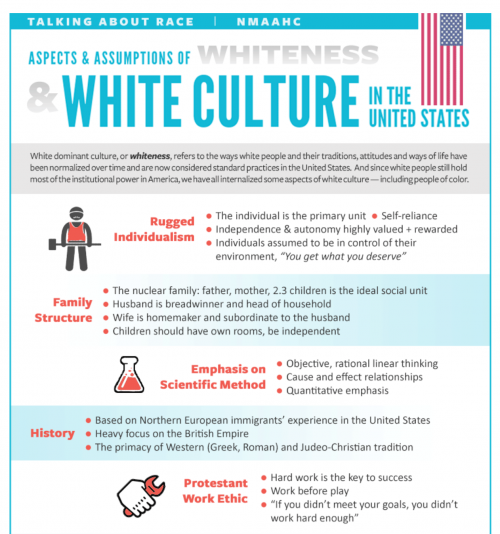 Personally, I think it aimed at a bad target. It’s not about “whiteness” itself, it’s about the assumptions of the dominant culture of modern America, and as an exercise at looking at ourselves, it’s useful and insightful. Of course, it doesn’t matter anymore, because the right-wingers were so outraged and expressed the same attitude as Taibbi and the graphic was “cancelled”. Oops. They keep self-owning themselves.

Take the Smithsonian story. The museum became the latest institution to attempt to combat racism by pledging itself to “antiracism,” a quack sub-theology that in a self-clowning trick straight out of Catch-22 seeks to raise awareness about ignorant race stereotypes by reviving and amplifying them.

Oh? And how will you propose combating racism, by pretending it doesn’t exist?

It’s a shame, because look at what it highlights. This is not examining the obvious or necessary components of a successful culture, it’s pointing out unconsidered values we hold and asking us to think about them. Consider alternatives.

For instance, “rugged individualism”. You can’t doubt that this is an implicit value in American culture, and in fact many of the comments responding to York are aghast that we could even question this. But what if an alternative were “cooperative communities and mutual aid”? That would be a better solution to America’s problems, but no, we’re supposed to love the cowboy myth.

Or “family structure”, the heterosexual pairing of a dominant male breadwinner with a subservient female marital aid and housecleaner. Why is that assumed by the American culture at large to be an ideal? It has oppressed more than half our population for centuries and has done us nothing but harm.

Or take “emphasis on the scientific method”. I love the scientific method, I’m a scientist, I apply it all the time. But linear thinking often fails in complex issues with multiple contributing causes, and people are emotional animals who rarely make purely objective decisions. When you limit yourself to only one path to a solution, you’re circumscribing the range of possibilities to such a terrible degree you’re going to miss equally good or better alternatives.

“History”: oh sweet jesus, spare me the monstrous chimera of the “judeo-christian tradition”. All they have in common is the Old Testament, which is a compendium of barbarities and superstitious evils. There are more than 7 billion people on the planet, and they are making a legitimate complaint that our version of “history” is a biased collection of rationalizations for the oppression of the majority by a minority.

Or the “Protestant work ethic”, which is simply an awful way to indoctrinate labor to serve the needs of their bosses. How about work/life balance? How about about recognizing that “hard work” is usually unrewarded with anything but the bare minimum of necessities (sometimes not even that), and that the true path to riches is theft and inheritance, under our current system?

None of these are actually “white” values, although they do serve to maintain the status quo and benefit the majority, who are mostly white, and it’s unsurprising that a museum of African American history and culture would find it worthwhile to point out our biases…and for an angry mob of far-right conservative assholes to squash it. Yet somehow Taibbi finds the African American side to be the one that must be deplored and chastised, while the lunatic right-winger is his ally, and thinks this is a great example of the Left being more evil than the Right? Does he even realize that the graphic is intended to demonstrate the unthinking, implicit assumptions of the American public? This is Anthropology 101 stuff, nothing radical, it doesn’t even make any judgments on whether these are good or bad values, it simply describes the traditions of American culture. People commenting on it are all saying “great values!” and “this is the way to succeed!”, etc., etc., not even aware that they are all confirming the accuracy of the graphic.

But no, to Taibbi this just confirms that the Left (it’s not even written from a leftist perspective!) has gone insane and is worse than the Right. Apparently, questioning your values is not something anyone is supposed to do in Matt Taibbi’s America.

OK, Taibbi, this is going to hurt you a lot worse than it will me — I shall resume the cruel torture of not reading your work any more.