I’m reading Tea Francis’s story, and wow, that’s me, except I waited until I was 60 to get into spiders. I wasted so much time! (Well, not really, I do have a family and a career, so I can’t complain about that.)

I have kept spiders for almost 20 years now, sometimes just one tarantula, sometimes lots of different types of spiders, but they’ve been present in some capacity ever since I was 17 or 18. After moving somewhere with more space at the beginning of last year, my collection had expanded significantly to almost 200 spiders of all different types. I decided to start an Instagram account to post about my spiders as whenever I posted anything to do with them anywhere else, I got a load of the usual ‘kill it with fire’ responses which I find grating, to say the least. I started to focus my attention on studying them a lot more closely. I invested in my very first DSLR and macro lens and set about learning how to use it. That in itself unlocked a whole new level of appreciation for them and I quickly became hopelessly, irretrievably obsessed. With new photos popping up on my Instagram feed every day, sometimes multiple times a day, they seemed to be gaining rather a lot of interest from other enthusiasts, photographers, keepers and even arachnophobes who were consciously working on overcoming their fears. This was a bit of a revelation for me & definitely a motivation to do more! I took it to Twitter as well and began posting there too, where I ended up meeting a lot of arachnology folk who were either studying towards or already active in the field I had always quietly dreamed of being involved in myself. Actually working with and researching spiders.

Then look at her lovely spider nook! It’s like fantasy land! 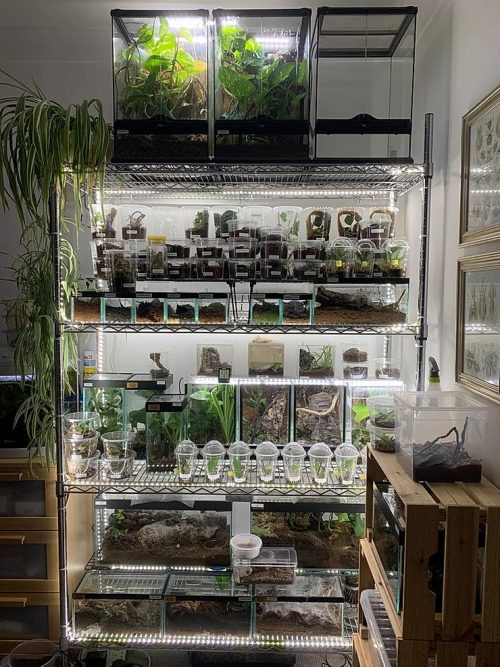 I’m not too jealous, though. I look at that and see a heck of a lot of maintenance work, and also sadness — most spiders aren’t that long-lived, so there’s always death among the beloved horde. Also, this would be a terrifying time to be at the start of a science career. Stay strong, Ms Francis!

You might want to skip this montage » « Yay, Belgium!