Would you believe Republican Senator John Cornyn had the gall to mouth off about the scientific method? Of course you would, he’s an idiot.

After #COVIDー19 crisis passes, could we have a good faith discussion about the uses and abuses of "modeling" to predict the future? Everything from public health, to economic to climate predictions. It isn't the scientific method, folks. https://t.co/OYBm3CIUxX

That’s just breathtakingly stupid. Does he have the slightest understanding of what a model is? It’s the core of the hypothetico-deductive process (which is not the whole of science, but it’s pretty essential). He’s been refuted in a couple of places by knowledgeable people already.

In a now-famous lecture, quantum physicist Richard Feynman similarly described to his students the process of discovering a new law of physics: “First, we guess it. Then we compute the consequences of the guess to see what… it would imply. And then we compare those computation results to nature… If it disagrees with experiment, it’s wrong. In that simple statement is the key to science.”

Zach Weinersmith also has a 100+ panel comic describing epidemiology and models if Mr Cornyn needs pictures to go with the words. 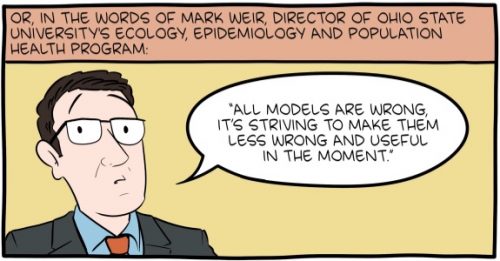 If Cornyn actually wanted to have a “good faith discussion” about epidemiological modeling (I don’t believe he does), I have a couple of expectations: as someone who has no training in science at all — he’s a lawyer — he ought to be more humbly asking for information, rather than poisoning the well with nonsense, and he has to admit that the source he worships, Donald Trump, is a total incompetent at science and a worthless font of misinformation. Then we can begin.

Actually, I think I’d rather begin by seeing Cornyn evicted from his office.

I am currently buried in class prep » « Can Minnesota please join your club?