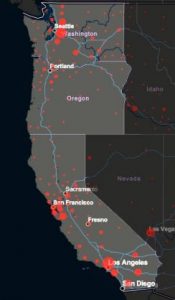 Did you hear the news? Washington, Oregon, and California have announced their independence on matters dealing with the pandemic, forming the West Coast Pact. The political fragmentation predicted in so many cyberpunk novels is actually happening! How exciting! Maybe.

COVID-19 has preyed upon our interconnectedness. In the coming weeks, the West Coast will flip the script on COVID-19 – with our states acting in close coordination and collaboration to ensure the virus can never spread wildly in our communities.

We are announcing that California, Oregon and Washington have agreed to work together on a shared approach for reopening our economies – one that identifies clear indicators for communities to restart public life and business.

While each state is building a state-specific plan, our states have agreed to the following principles as we build out a West Coast framework:

Those are smart, science-based goals, contrary to what we’re getting from the federal government and the nest of grifters and thieves that occupy it. I can understand why they’re doing this, and wish Minnesota could join them. We’d be a real asset! We’re a center for biomedical research and industry, and we can buy our way in with corn — lots of corn. I, personally, have strong ties to the west coast, as do many of our citizens. Let us in! You know, we’re surrounded by Greater Wingnuttia, with Wisconsin, Iowa, and the Dakotas all full of Trumpkins. Maybe we can negotiate a connection through Canada to Washington?

But then I think…you know, our brothers and sisters in Wisconsin have struggled against the forces of darkness for so long. For the last election Republicans cut the number of polling stations in Milwaukee from 180 to 5, citing coronavirus fears…but then these same Republicans refused to allow voting by mail-in ballot, while all the State Supreme Court justices who rejected the notion voted by absentee ballot. It was a blatant, criminal act of voter suppression, yet the voters persevered and kicked one of the conservatives off the court and elected a liberal judge.

Jill Karofsky beat Daniel Kelly, whom then-Gov. Scott Walker (R) appointed to the state’s high court in 2016. Trump endorsed Kelly and on Election Day urged Wisconsin voters “to get out and vote NOW” for the justice.

She won? In spite of all the hurdles Wisconsin threw in her way? This should be an inspiration to us all.

And then, South Dakota. Sioux Falls, SD is currently one of the hottest hot spots for coronavirus infections in the country, thanks to the Smithfield food processing plant, which responded to demands to keep the economy alive (and money flowing into the owners’ pockets) by keeping their workers toiling away. The city’s mayor did the right thing by asking to impose orders to limit the spread of the infection. He was listening to the recommendations of scientists.

“A shelter-in-place order is needed now. It is needed today,” said Sioux Falls Mayor Paul TenHaken, whose city is at the center of South Dakota’s outbreak and who has had to improvise with voluntary recommendations in the absence of statewide action.

He was overruled by the Republican governor, Kristi Noem.

But the governor continued to resist. Instead, she used a media briefing Monday to announce trials of a drug that President Trump has repeatedly touted as a potential breakthrough in the fight against the coronavirus, despite a lack of scientific evidence.

She was listening to the recommendations of Jared Kushner, slumlord, profiteer, con artist.

Noem deserves to rot in hell, but does TenHaken? Do the workers at Smithfield?

I’m beginning to doubt the wisdom of the Western States Pact, and I keep returning to that last statement in their declaration: “Our states will only be effective by working together.” I think that’s true, but I’m not sure what they mean by “our”. Which “our”, 3 states on the west coast? Or should we be thinking bigger, of 50 states and American Samoa, Guam, the Northern Mariana Islands, Puerto Rico and the U.S. Virgin Islands, all working together to tear down one corrupt regime in Washington, DC, united to provide for the common defense and general welfare of the United States. The problem isn’t Wisconsin, or South Dakota, or Idaho or Nevada or even Texas — it’s the incompetence and malfeasance of the Trump administration and the Republican senate. That’s what we need to work together to destroy.

Well, also, maybe Wall Street should be one of our targets.