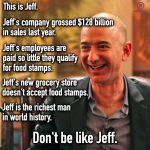 Chris Smalls has been organizing workers at an Amazon facility in Staten Island. His goal has been to get the company to provide better safety protections.

“Amazon would rather fire workers than face up to its total failure to do what it should to keep us, our families, and our communities safe,” said Smalls.

“I am outraged and disappointed, but I’m not shocked. As usual, Amazon would rather sweep a problem under the rug than act to keep workers and working communities safe. Today, I stood with my co-workers because conditions at JFK8 are legitimately dangerous for workers and the public. Amazon thinks this might shut me up, but I’m going to keep speaking up. My colleagues in New York and all around the country are going to keep speaking up. We won’t stop until Amazon provides real protections for our health and safety and clarity for everybody about what it is doing to keep people safe in the middle of the worst pandemic of our lifetimes,” he added.

Multiple workers have recently contracted the coronavirus, and they were justifiably increasingly concerned that the pandemic was going to sweep through the facility. Amazon’s explanation for why Smalls was fired was charmingly Orwellian.

Amazon (AMZN) confirmed the firing Monday night, telling CNN Business in a statement that the employee, Christian Smalls, was supposed to be under quarantine.

“Mr. Smalls was found to have had close contact with a diagnosed associate with a confirmed case of COVID-19 and was asked to remain home with pay for 14 days, which is a measure we’re taking at sites around the world,” said Amazon spokesperson Kristen Kish. “Despite that instruction to stay home with pay, he came onsite today, March 30, putting the teams at risk.”

The richest man in the world is going to find a way to use the pandemic to oppress workers further and get richer, isn’t he?