Well, I found it exciting anyway. One of the problems I’ve faced in my new research on local spiders is that I can’t tell two species apart, Parasteatoda tepidariorum and Parasteatoda tabulata. Even the expert sources I consult usually discriminate by dissecting their genitals, which is not useful for me, since I want to study live animals and embryos. There is one suggestive hint, though: P. tabulata builds funky little nests in their webs in the wild, while P. tepidariorum apparently does not. It’s a behavioral distinction, and I have no idea how definitive it is, but at least it’s an angle.

Unfortunately, I haven’t been able to see nest building in the lab. I’ve tried throwing in miscellaneous office debris, like stuff from a whole punch and a paper shredder, but they never pay attention to it. Maybe all of my lab animals are P. tep? Maybe I’m providing the wrong kinds of nest material? I dunno.

So yesterday, in a forlorn, half-assed try, I noticed all the fine wood shavings in the containers for wax worms, their food, and I sprinkled a few small shavings in the cage for one of the new generation of spiders, not yet named, and went home. I’d spread them around, and even avoided the place where she was currently nesting (spiders have preferred spots to hang out in).

Today, presto…she had gathered the majority of shavings into one central place, and had built a nest. Isn’t it beautiful? 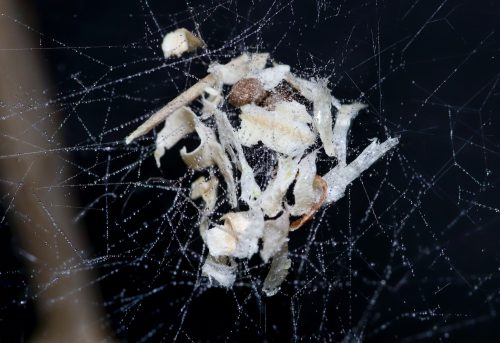 You can’t see her in there, because she’s hiding. You can see her brown egg sac, near the top center of the nest. I’ve also highlighted the cobweb by misting it with water. I guess I was just failing to give them the correct home-building materials before.

This is excellent news! Now I have to give all of the spiders in my colony some wood shavings, and see if they fall into two groups, nest-builders and non-nest-builders. I have a student who proposed studying this distinction this summer, if that still happens in this age of pandemic, and one thing we’ll have to try is a nest construction time-lapse — that really was assembled overnight, so it’s speedy, but it was done in the dark, so we’ll have to play with cameras and lighting to see if we can observe it.

The bad news is that when Tabitha — she has a name now — dies, we’re going to have to dissect her and observe her genitals very closely, to independently confirm her species.

Otherwise, though, this is so exciting! Thrilling, even! All the spiders get wood shavings! Everyone gets wood shavings! You can have wood shavings! Come on, you’ve got to admit that complex nest construction behavior in an invertebrate is fun stuff, even if it’s totally unsurprising, given that spiders have always been elaborate builders.

P.S. You might actually be able to see a bit of spider anatomy poking out in one place, but I’ll leave it as an exercise for you to Find the Spider.

The best trolley problem for our times! » « Canada is as colonialist and capitalist as the USA