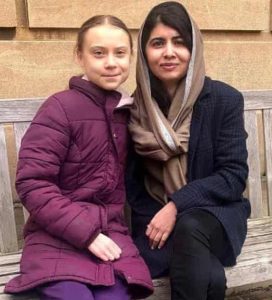 The right wing authoritarians recently looked around and noticed that they have a girl gap. While the reality-based community has Greta Thunberg, they had nothing — so they cast about desperately, found Naomi Seibt, and the Heartland Institute elevated her to be their Anti-Greta spokesperson. Only they tried a little too hard, and got someone who is the antithesis of Greta in all things.

Where Greta is painfully, passionately honest, the Anti-Greta is a carefully groomed liar. Here’s a perfect example of an obvious lie.

The teenager, from Münster in western Germany, claims she is “without an agenda, without an ideology”. But she was pushed into the limelight by leading figures on the German far right and her mother, a lawyer, has represented politicians from the Alternative für Deutschland (AfD) party in court.

Seibt had her first essay published by the “anti-Islamisation” blog Philosophia Perennis and was championed by Martin Sellner, leader of the Austrian Identitarian Movement, who has been denied entry to the UK and US because of his political activism.

Anybody who claims to be without an agenda or an ideology is lying. That she also supports right-wing bigotry is more evidence that she lies.

Also, the Heartland Institute is paying her, and they are an evil and ethically bankrupt institution. Good grief, they lobby for the tobacco industry and fracking, as well as against climate change. The Anti-Greta is their puppet.

I think I’d rather be on the side of the genuinely good, like Greta Thunberg and Malala Yousafzai. That’s my agenda, my ideology, and I’m proud to say it.