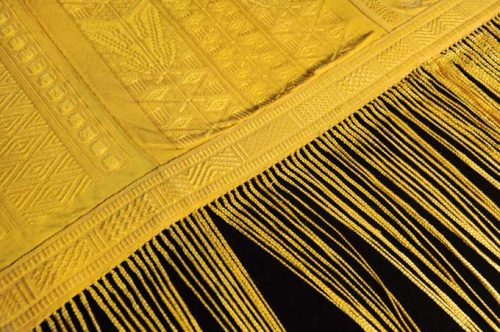 It’s spidercloth, a single piece of silky fabric made from silk drawn from a million spiders. It might be a little bit labor intensive.

To produce this unique golden cloth, 70 people spent four years collecting golden orb spiders from telephone poles in Madagascar, while another dozen workers carefully extracted about 80 feet of silk filament from each of the arachnids. The resulting 11-foot by 4-foot textile is the only large piece of cloth made from natural spider silk existing in the world today. 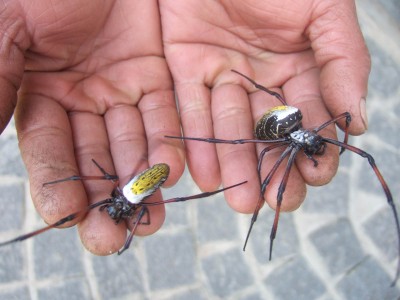 So I can’t pick up a spidercloth cloak at Target?

Of course, spending four years to produce a single textile of spider silk isn’t very practical for scientists trying to study the properties of spider silk or companies that want to manufacture the fabric for use as a biomedical scaffold or an alternative to Kevlar armor. Several groups have tried inserting spider genes into bacteria (or even cows and goats) to produce silk, but so far, the attempts have been only moderately successful.

Part of the reason it’s so hard to generate spider silk in the lab is that it starts out as a liquid protein that’s produced by a special gland in the spider’s abdomen. Using their spinnerets, spiders apply a physical force to rearrange the protein’s molecular structure and turn it into solid silk.

Well? Get right on that!