A police officer in Kansas stirs up outrage by posting a photo of a McDonald’s coffee cup labeled with the words “fucking pig”. He made it all up. He claims it was “just a joke”. He has been dismissed from the police force.

A class of correctional officers in training (prison guards, that is) included all of the members giving a Nazi salute in the class picture, claiming it was “simply a greeting”, and that “there is nothing wrong with it, we have people of all colors and backgrounds in the picture and every one of them are participating.” The training officer, Byrd, also said that it was an honor because she was “a hard-ass like Hitler.” All of them, including two officers, have been fired. 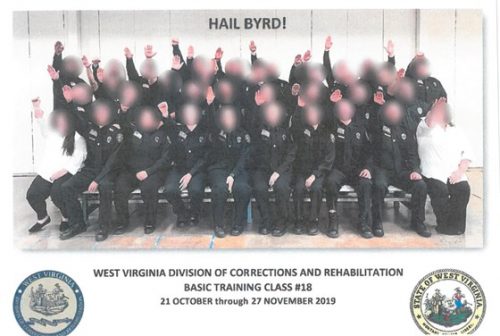 As a capstone to this demonstration of historical ignorance, the cadets say they were just following orders.

The report states some cadets “only followed what they perceived to be an order from Instructor Byrd to do the ‘Hail Byrd’ for the photograph because they feared they would not graduate, or would be disciplined for failure to follow the order of a superior.”

These are not the worst things the police have done and are doing — murdering citizens for being black has to top that list. It does tell you that there is something deeply wrong in the training of the police, or the kind of people who sign up to “serve”–they seem to think they’ve joined up to be tinplate authoritarians.