I’ve always wondered about this — I live in wind turbine country, my university runs a couple of them, and I’ve been out to walk around them, and there’s always something missing. There aren’t heaps of dead birds under them, like Donald Trump claims there are! I wondered if the blades strike these birds and flick their lump dead corpses off into the distance, or if there are thriving swarms of scavengers lurking in the bushes that snatch up the meat bounty falling from the heavens. It turns out I was wrong. wind turbines kill some birds, inevitably, but the real danger is…your cats. 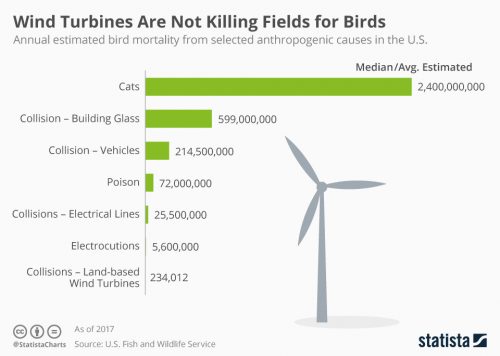 I find it hard to believe MY PRESIDENT lied to me.

I assume that he will adapt to the facts and change his message at campaign rallies to something about how we need to deport or kill all those cats. He could probably put some kittens in a sack and slam it against a wall a few times, and then fling it into a river — his fans will all cheer.

I refuse to be an agent of Ingsoc » « You tried, Dave Barry