Classes are over. Christmas is less than two weeks away. I’ve got a month of relaxation ahead of me. So what do I do? Read the most godawful depressing doom and gloom stuff.

Anglo-American society is now the world’s preeminent example of willful self-destruction. It’s jaw-dropping folly and stupidity is breathtaking to the rest of the world.

The hard truth is this. America and Britain aren’t just collapsing by the day…they aren’t even just choosing to collapse by the day. They’re entering a death spiral, from which there’s probably no return. Yes, really. Simple economics dictate that, just like they did for the Soviet Union — and I’ll come to them.

Boris Johnson and Donald Trump are now the pre-eminent symbols of suicidal collapse in the world right now. The core problem, though, isn’t going to disappear if those two were to melt into decaying goo right this instant. They have a network of criminal bureaucrats supporting their regimes. And below those are vast mobs of ignorant rubes willing to vote for them.

A more technical, formal way to put all that is this. Europeans distributed their social surplus more fairly than we did. They didn’t give all the winnings to idiot billionaires like Zucks and con men like Trump. They kept middle and working classes better off than us. As a result, those middle and working classes were able to invest in expansive public goods and social systems. Those things — good healthcare, education, transport, media — kept life improving for everyone. That virtuous circle of investing a fairly distributed social surplus created a true economic miracle over just one human lifetime: Europe rose from the ashes of war to enjoy history’s highest living standards, ever, period.

I don’t think there is no escape, but this is a generational problem. We’re not going to dig ourselves out of the hole in a single election cycle, that’s for sure, and it’s going to take long term effort at root of our societies to repair it.

The problem is the same problem every democracy faces: demagoguery. For the last 70 years, US politics has been the playground of boogeymen. First it was the Commies, an external threat that led to the construction of the military/industrial complex, stupid wars, and a wasteful build up paranoia and guns. Then in the 60s it switched to an internal boogeyman: race and immigration. It turns out that if you play up a vast imaginary existential threat, you can lead the sheep to slaughter themselves. They’ll dismantle health care and education and social welfare willingly, just on the threat that The Other will benefit. The Republicans have built their base on bigotry, while the Democrats have gone along willingly on the promise of neo-liberalism and do-nothing centrism. The problems just grow and grow, building more generations of ignoramuses who make the problems worse and worse.

And so it goes.

I’d like to think we’ll reach a breaking point and the destruction of our pride and prestige will snap people out of these delusional acts of self-destruction, but they only seem to amplify themselves. Wreck education, and our lead in science and technology crumbles, and you’d think the people would say we need to repair the educational system to catch up…but no, instead they whine that it’s all those liberals coming out of the colleges that are the cause, so they resolve to wreck it more.

And that’s where we stand, thrashing about and chasing all the wrong solutions.

I’m sure there’s a way out. It’ll require some resolve and will, though, and it’s far easier to blame brown people and intellectuals and uppity women.

As soon as I posted this, I discover an excellent illustration of the problem. 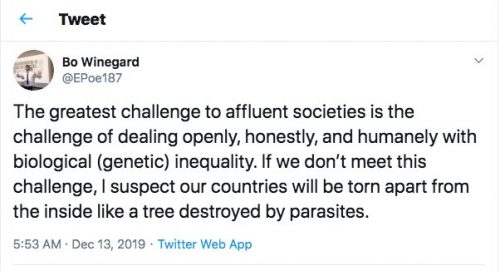 Yep. The problem isn’t that we’re busy demolishing our infrastructure and tearing apart the people who make up our society, it’s that we aren’t doing enough to smash those “parasites” and root out the imaginary genetic inequalities. It’s people like Bo Winegard who are killing us all.