A few years ago, we bought a vest and leash for our cat, with the idea that she’d be able to play outside, supervised. She tries to escape at every opportunity, so we thought she’d like that. It was a nightmare. She was shape-shifting and twisting and clawing and yowling to escape, and ended up pulling a Houdini, getting out of it, and leaping in a single bound onto the roof of our house. We immediately gave up on trying ever again. You can imagine what I think of this idea for a Halloween Spider Costume for Dogs, Cats. 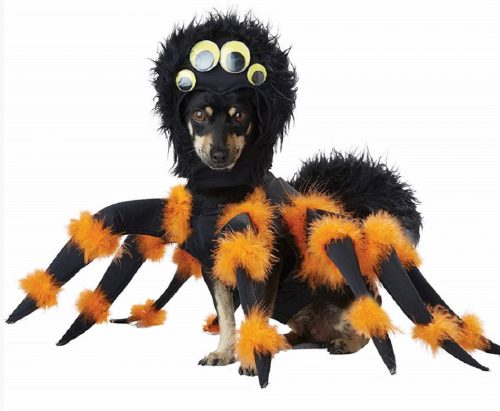 No way. Nope. That would not be cute. It would be more like a scene from John Carpenter’s The Thing, and for more versimilitude, it would be my guts spilled over the scene.

Although…I wonder if the large size would fit me?

P.S. If anyone has a similar spider costume for their pet, send me a photo and I’ll post them for Halloween.