The last time I saw David Silverman was in October of 2016, in China. We’d both been invited to speak at a small conference in Beijing, and we were treated like royalty. For an hour of talking, we got swept off to fantastic restaurants, to guided tours of the Forbidden City and the Great Wall, and basically treated like heroes. For me, it was something of the last gasp of the glorious atheist movement, but it had started dying years before. Silverman was a dead man walking, guilty of betrayal of our goals even then, and I was so irrelevant I had no idea of the stories swirling around him that would lead to his abrupt downfall.

All I knew was that, despite his bombastic style, he was effective at getting attention for American Atheists. I was annoyed by his efforts to woo conservatives to atheism at CPAC — I considered their values antithetical to the egalitarian, pro-science views an atheist movement ought to endorse — but at the same time he was a prominent atheist leader openly (one could even say bombastically) promoting feminist ideas of social justice. He was an annoying combination of good words often said badly, and lip service to high ideals contradicted by his courting of people who opposed them. But hey, it got his face on the news.

All that fell apart when he was fired by American Atheists, and suddenly (to me) all the behind-the-scenes unsavoriness was exposed. He was accused of financial malfeasance, using the organization’s money to promote his book, and worst of all, of an ugly history of sexual abuse of women, including young students. He was unemployed and unemployable, his false front was exposed, he was a meteor falling from the sky with his ass on fire, in possibly the most spectacular act of self-destruction I’ve ever witnessed. He’s gone and nobody wants him back.

But he’s still trying, still the eager self-promoter. If respectable organizations won’t give him the time of day, well, there’s always the bottom of a barrel to scrape for sustenance for his ego. He has announced that he’ll do anything for anyone who’ll give him air time.

I'll take that under advisement. In the meantime please be prepared for me to go on any show that brings me on. Because I have stuff to do and a word to spread.

Anything. So now he’s appealing to misogynistic fascist YouTube. He has appeared on Sargon’s channel. 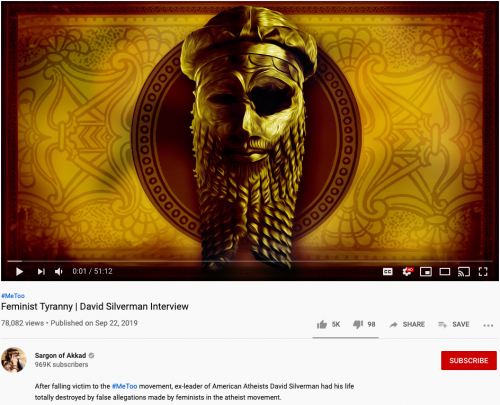 I’m sorry, but as you can see, I’ve only listened to one second of that poison. The blurb was enough for me.

After falling victim to the #MeToo movement, ex-leader of American Atheists David Silverman had his life totally destroyed by false allegations made by feminists in the atheist movement.

His life totally destroyed! That seems to be a common refrain by all the Harvey Weinsteins and Louis CKs and Lawrence Krauss’s who got wrecked by their own selfish, self-destructive acts. How dare well-off abusers and exploiters get exposed? It’s all the women’s fault.

As for “false allegations”, ask the women. Silverman’s depradations have been documented.

She and Silverman had known each other for years, and he flirted with her throughout the evening, she wrote in the complaint. After the other guests left, R. wrote that Silverman asked her to join him in smoking marijuana on the roof. But before they left the room, he suddenly forced himself on her.

“He physically pressed me to the wall and began to kiss me forcefully, grabbed my breasts, and put his hand into my leggings where there was actual penetration of my vagina,” she wrote.

R. got her feet and said “no,” she wrote. Silverman then lightly slapped her face and said, “You don’t get to say no to me.”

Or how about this?

The third allegation reviewed by the American Atheists board involves a student, Rose St. Clair, who alleged that Silverman used his position of power to pressure her into having sex with him. “At several points during this encounter, I hesitated to continue,” she wrote. “I believed that if I did anything to upset him, my chances at being involved in the secular community, especially with American Atheists, would be ruined.”

In 2012, St. Clair was an undergraduate at the College of William and Mary in Virginia who hoped to make a career in the atheist movement. At the annual convention of the Secular Student Alliance in Columbus, Ohio, she was invited to go to a bar with a group of speakers at the conference, including Silverman.

Afterward, St. Clair said that Silverman told her she would have to leave early in the morning because his wife would be arriving at the hotel. She said he told her not to apply for an internship with American Atheists because appointing her could be seen as preferential treatment.

“I felt my interest in working for the organization was used as a way for him to have power so that I would have sex with him,” St. Clair said.

Silverman has admitted that these events occurred, has even elaborated on the unsavory details in interviews, but is trying to claim that they were entirely mutually consensual.

“I certainly behaved sometimes in a manner that was unworthy of the office of president of American Atheists,” Silverman, 52, said in a phone interview this week, the first time he has spoken publicly about being accused of nonconsensual sexual contact with two women, one of them a student, at atheist gatherings.

Silverman denies the women’s allegations that their relations were nonconsensual, and American Atheists say he was not fired due to sexual relationships.

I’ll say that he certainly was unworthy of the office, with the caveat that if American Atheists did not find those particularly incidents sufficient to fire him, then the office wasn’t worth much. What actually got him finally fired was this:

American Atheists placed Silverman on paid leave while it investigated a complaint from staff concerned that he had not disclosed financial and personal conflicts of interest relating to the promotion of his book, Fighting God: An Atheist Manifesto for a Religious World, and the appointment to a senior position of a woman with whom Silverman was allegedly having a sexual relationship. (That appointment has been rescinded.)

These scummy activities had been going on in 2012-2015, at least, so when Silverman and I were being good buddies on a junket to China, all of this was playing out in the background, and this ugly history was a missile waiting to explode on him. One of our touristy events was a tour of a silk factory, and I remember him ordering a set of gorgeous silk sheets that I would never be able to afford (although they really were a bargain) that he thought his wife would love, but all the while he had betrayed his family and the cause I thought we were both working for, and the whole thing was a charade.

And now he’s pandering to anti-feminist YouTube. Sargon and Silverman deserve each other, and perhaps the best and most appropriate use of Silverman’s talents is his current occupation, selling insurance. Although I would never buy insurance from him.

My disillusionment with the atheist movement continues.

Children are to be sold quietly to billionaires, not heard » « Legal wrasslin’ indefinitely prolonged