Milo Yiannopoulos is really getting desperate. He’s looking for an audience, any audience, that will pay attention to him, and he has battened on a peculiar one: right wing furries. What I’ve known of the furry community is that they’re extraordinarily tolerant — these are people who belong to a ridiculed minority, and their reaction has been openness and acceptance. Apparently, there is an even tiny minority of alt-right people within this small minority of fans of furry culture, and Milo wants to make himself king of this tiny sliver.

He announced that he would be attending a furry con.

Yiannopoulos posted an email screenshot to one of the few platforms he has left—his Telegram messaging channel—on Saturday and claimed he registered for Midwest FurFest, a convention “to celebrate the furry fandom” hosted in the suburbs on Chicago this December. “Furries,” as they’re often called, are groups of people who have interest in animal personas with human characteristics; people who participate in the subculture often present themselves as non-human characters via art and costumes.﻿

Yiannopoulos also claimed on Telegram that he had submitted a form to suggest he host a panel called “The Politics of Fur.” He asked his followers who plan to attend Midwest FurFest to message him to arrange “dinner, drinks, photos or anything else.”

I suppose it’s possible that he’s long yearned to be a snow leopard, but more likely he just wants to take advantage of a few people — that’s always been his modus operandi as a professional scammer. Unfortunately for him, conference organizers saw right through him and rejected his application. I don’t think there are many niches left where everyone doesn’t know exactly what kind of hateful slimeball he is.

He has now announced that he is going anyway, despite not being registered. I don’t know what he’s planning to do…get drunk in the bar and dance around in the lobby, mocking the attendees? That is his art, after all. I don’t think it will win him a beachhead in the furry community. 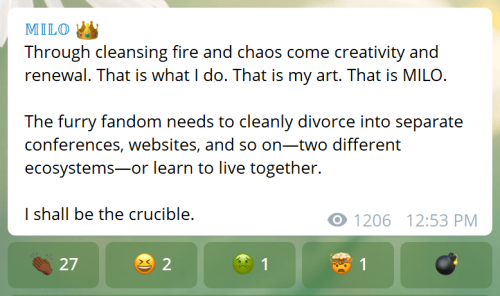 He does have an impressive ego. It must make it hard to cope with his irrelevance.

The Gideons are on campus again » « rms resigns