Spider taxonomy drives me cross-eyed. Today I was working on sorting egg sacs, tearing them away from their mommies, who don’t like that one bit — they’re very protective. I’m learning to tell the different species apart without a microscope. For instance, Steatoda triangulosa has a distinctive zig-zag of pigment on their abdomen that looks like a row of triangles from above, and they also have nearly spherical egg sacs that are white, have a fluffy surface, and are often semi-transparent. Parasteatoda, on the other hand, has an irregular mottling that sometimes looks roughly stripey, and their egg sacs are football-shaped, beige, and have an opaque leathery/papery surface (there are two species of Parasteatoda around here, P. tepidariorum and P. tabulata, which I haven’t learned to distinguish — it requires careful scrutiny of their genitalia — and my live spiders refuse to sit still long enough to poke around their private parts). Those are my rules, they’re what helps me figure out who is what.

So today I’m parting Lyanna from her egg sac…here’s Lyanna: 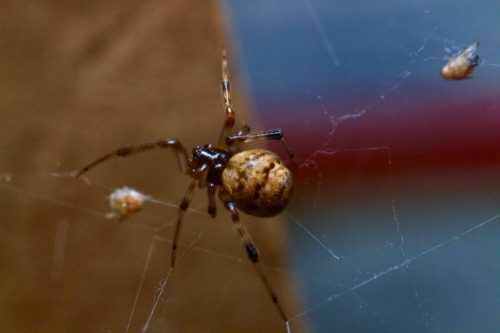 She’s very pretty, isn’t she? Here’s more photos from different angles so you can clearly see her abdominal pattern. 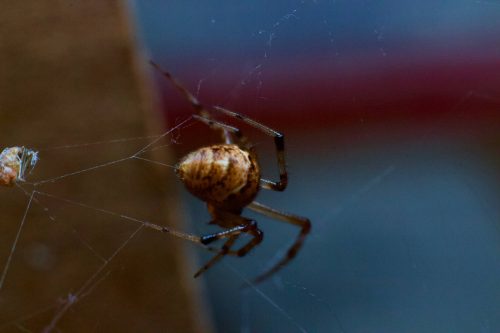 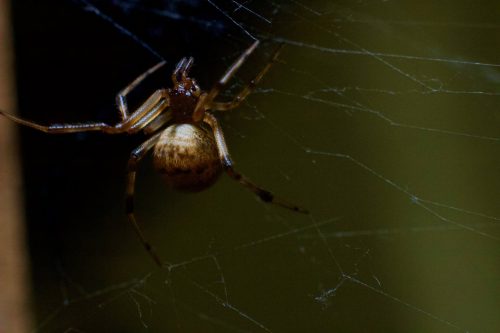 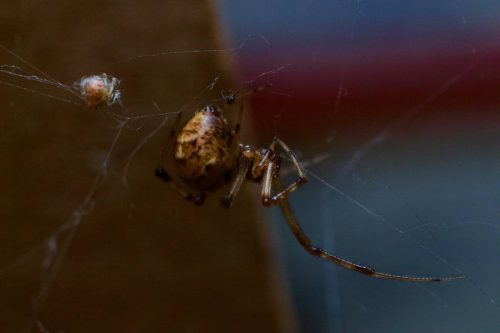 Tell me if you agree: no triangles. Mottled. Kinda stripey. That’s Parasteatoda, definitely. No way could that be S. triangulosa.

Then I put her egg sac under the microscope, and it’s small, round, perfectly white with a fluffy texture, and I can see a small number of eggs right through it. If I saw it alone, I’d say S. triangulosa.

There are possible explanations, of course. Maybe there are common variations in egg sac morphology, and species just define a probability, so this is just an extreme in Parasteatoda morphology. Or there are variations in pigment pattern that are likewise probabilistic or environmentally influenced. Or I’m raising a hybrid. Or maybe species (or in this case, genera) have much fuzzier boundaries than I’m used to. Or maybe I’m just not very good at IDing spiders.

I never had this problem with zebrafish. It’s Danio rerio, that’s it, done. We never had to fuss over this taxonomy stuff.

I wonder about this all the time! » « Disgusting