I’ve probably seen the name “John Glynn” around — he was prolific, and was getting published all over the Rightosphere and elsewhere. He even got published in the Huffington Post, so some left-leaning pubs had stuff with his byline. But I would have sailed right over it, because his work was all bumblingly ideological and built on evolutionary psychology BS, which immediately flagged him as a charlatan, despite his claimed status as holder of a doctorate and professorships at several universities. Really, people, saying you’re a professor doesn’t make you infallible!

But some people, especially those gullible enough to favor EvoPsych and conservative positions, were taken in, including Michael Shermer.

I missed this in a truly remarkable week for politics, but Skeptic magazine was publishing somebody with fabulated credentials for three years presumably on the basis that he offered "evolutionary psychology" answers to contemporary issues. https://t.co/kmSIhbBKUi

To his slight credit, Shermer exposed the guy as a fraud. He became suspicious, not when Glynn submitted glib garbage to his magazine, but when Glynn asked for a loan. You can lie about science all you want, but when you start eyeballing a right-winger’s wallet, their ultra-sensitive sensors start pinging. Anyway, it turns out with a few questions it was determined that Glynn did not have an advanced degree, and did not work for any university. Everything was a lie. He’d persevered in publishing crap all over the place, successfully, and fooled Skeptic magazine for three years. The key was offering to write stuff that catered to the biases of publishers, leaping right past any critical evaluation.

Look where else Glynn published! Areo, where the “grievance study” nonsense was published, where Helen Pluckrose is an editor. Quillette. The American Thinker. The Federalist. 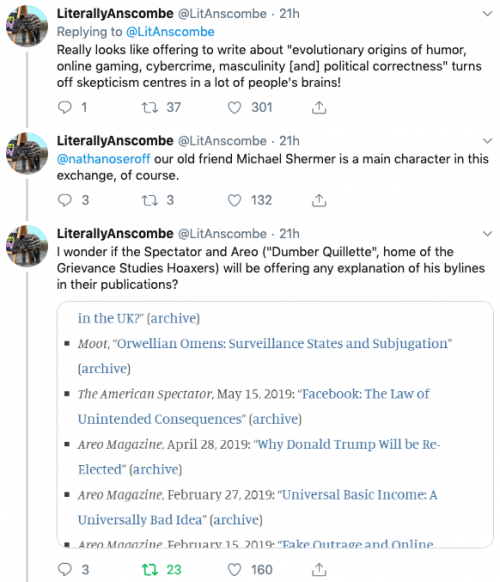 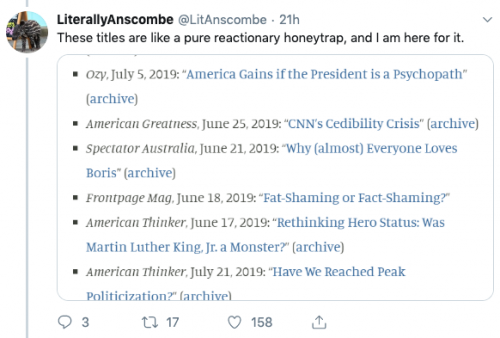 The credibility of Skeptic magazine and Shermer has been nonexistent for years, and they’re cruising along on the support of people who still buy into the garbage Glynn was peddling, so they’ll be fine — in fact, they’ll probably be praising Shermer as a true skeptic for identifying the fraud, ignoring the fact that he’d been publishing him for years. John Glynn will be fine, since he’s an insubstantial, lying wraith. He’ll just invent another pseudonym and another set of fake credentials, and continue making contributions to the trash heap of bad media. So I’m chagrined to say that, while this revelation is amusing, it’s not going to make a speck of difference.

Ito knew, Ito lied » « So much wrong in one little story