I took care of some tedious maintenance work in the lab today — organizing the vials of spiders (lots of them!), double-checking their classification and sex and relabeling them. I color-coded them by species (white is Parasteatoda, green is Steatoda borealis, yellow is Steatoda triangulosa) and made pink and blue stickers for females and males, which tells you the degree of excitement at the lab bench!

But some fun stuff was going on. Remember Brienne, the hugely swollen female that we were sure was going to make an egg sac any day now, and she didn’t, and she kept getting bigger and bigger? She finally got off the pot and laid a big batch of eggs! 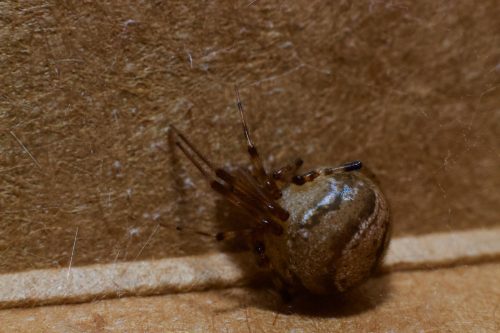 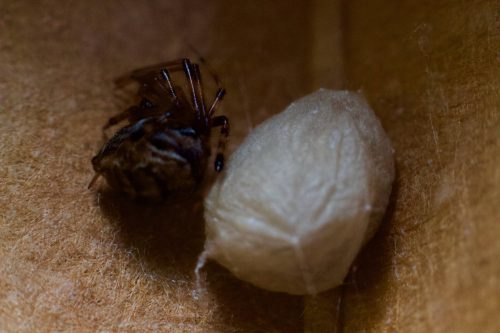 Finally! She hasn’t moved from that corner of her cage, but it’s got to be a relief to expel that load. The egg sac is bigger than she is!

Also, as I was sorting through the spiders, I saw that another egg sac had popped overnight. Here’s a contented female surrounded by her brood in one of our vials: 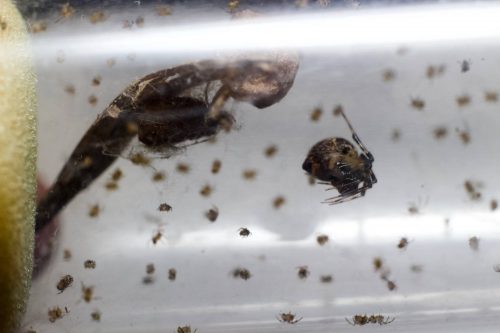 She’s a nameless P. tep, which seems callous now — we don’t give them names until we move them into the bigger cages, but they’re still quite capable of pumping out eggs in more cramped quarters. Maybe I’ll have to give her a newer, bigger home…and a name. Got any suggestions?