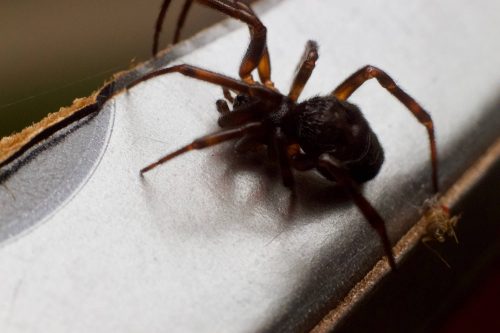 Monica is Steatoda borealis, and she’s huge. She’s twice the size of our Parasteatoda, and looks simply immense after working with our familiar little guys. She’s big even for S. borealis.

I gave her away to another home earlier this summer. A student was looking for a pet spider, and had a nice terrarium setup, and was going to feed her crickets, so it was safe. She showed up at my door today with Monica, and asked, “Is that an egg sac?” 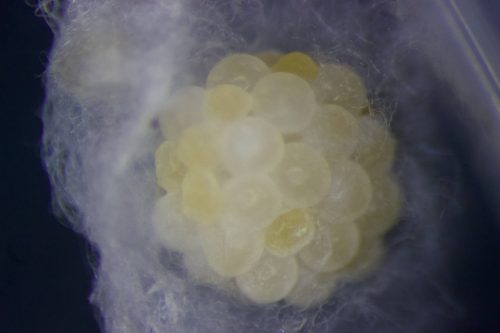 Sure is. Then she said, “I’m not ready to take care of a family,” a very responsible attitude to have, “would you take her back?” And of course I would. So I brought her back to the lab, and set her up in a nice spacious cage, and fed her lots of flies. I pulled out the egg sac and put it in a Petri dish, and that’s when I notice all the little black dots scurrying around in her old jar. This wasn’t Monica’s first go-round. She’d laid an earlier egg sac, unnoticed, which had hatched out probably last week, and laid a second sac, which we’d finally noticed. Here’s one of the many S. borealis babies. 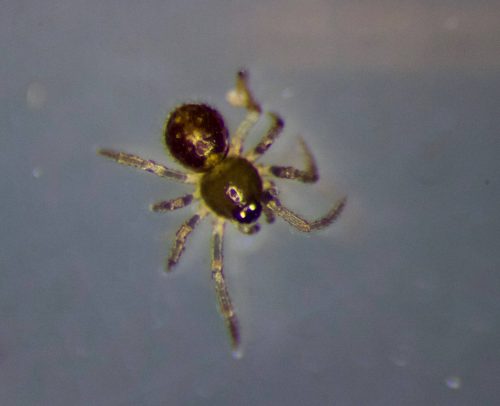 So now I’ve got hundreds of P. tepidariorum babies, a half dozen S. triangulosa babies, and on top of that I’ve just added what looks like 40 or so S. borealis juveniles, and a clutch of S. borealis eggs to nurse. All of these have appeared at my lab door in the last two weeks. Hey, it’s nice, but did they all have to appear at once?