I just got back from a late evening fussing over spiders, when I noticed a new sign in the hallway…or maybe it’s an old sign that’s just recently been uncovered. 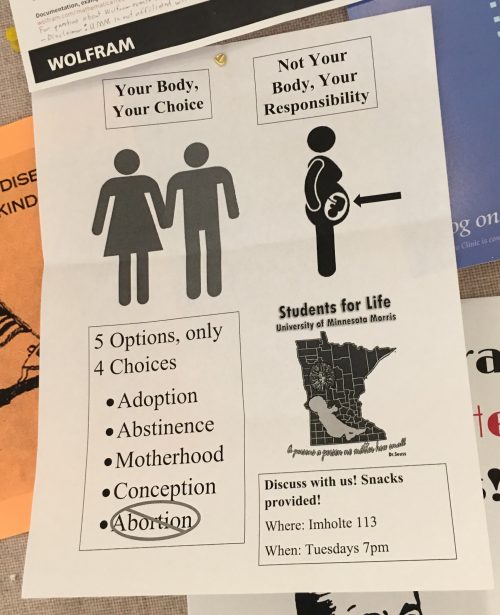 OK, walking through this…on the left, an icon of a man and a woman, labeled “Your body, your choice”. Below that, some strange ontology of choices: adoption, abstinence, motherhood, and conception are “options” and also choices, while abortion is an option but not a choice. In the context of the graphic designers’ head, what is the difference between an option and a choice? They all seem like options and choices to me.

On the right, there’s a cartoon of a pregnant woman and a fetus, with a big arrow (to be honest, when I saw the sign from a distance, it looked like a fat man with a gigantic erection which first roused my curiosity) labeled “Not your body, your responsibility”, which weirded me out. So getting pregnant means it’s not your body anymore? Where’s the man from the left picture? It’s not his responsibility?

It seems to me that Option #5, which is not a choice, is the only way to get your body back. It’s a confusing poster with a whole mass of implicit assumptions somewhere in it, that I’m sure make sense to our Students for Life, but not to me. I guess that makes me a Professor for Death, as long as we’re dichotomizing everything. Fortunately, I am not responsible, because it was an option not a choice, and because I’m a man, I think..

I have to stop thinking about this, I’m just getting more tangled up in whatever they’re trying to communicate.

No, I’m not going to their Tuesday meeting. I think that would be even worse.