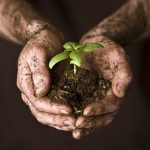 I was getting worried. My wife is on a gardening kick, fencing off a part of the backyard and tilling and planting and weeding — she’s been coming into the house with disgustingly filthy hands, and has been suggesting that I should get out there and dig in the muck, too. For a moment, I was afraid this article on “Healthy fat hidden in dirt may fend off anxiety disorders” might give her more ammunition in her battle to get me to help out with the weeds. Fortunately, after reading it, I think I can argue it’s irrelevant.

You’ve all heard of the hygiene hypothesis, which suggests that exposure to diverse neutral and pathogenic organisms from an early age might play a vital role in shaping our immune systems. Further, there’s the idea that we might also pick up beneficial organisms from soil that evolution has shaped us to use in regulating our immune systems, so that being away from dirt is throwing our physiology out of balance in subtle ways.

“The idea is that as humans have moved away from farms and an agricultural or hunter-gatherer existence into cities, we have lost contact with organisms that served to regulate our immune system and suppress inappropriate inflammation,” said Lowry, who prefers the phrases ‘old friends hypothesis’ or ‘farm effect.’ “That has put us at higher risk for inflammatory disease and stress-related psychiatric disorders.”

Lowry has published numerous studies demonstrating a link between exposure to healthy bacteria and mental health.

One showed that children raised in a rural environment, surrounded by animals and bacteria-laden dust, grow up to have more stress-resilient immune systems and may be at lower risk of mental illness than pet-free city dwellers.

OK, that sounds plausible, although I’d say that there are so many differences between growing up on a farm vs. in a city that it’s going to be hard to persuade me that exposure to Bacterium X is the crucial variable. The only way to find out is to read the original paper. So I did.

This particular paper does no evolutionary testing. It doesn’t compare farm kids to city kids. It doesn’t look at human stress disorders at all. It tests the effects of a molecule found in cell bacteria on cells from mice isolated in culture. Basically, they synthesized and purified 1,2,3-tri [Z-10-hexadecenoyl] glycerol, 10(Z)-hexadecenoic acid and tested it on cells loaded with receptor and recorder constructs so they could determine its mechanism of action — the bottom line is that this molecule under these conditions seems to have a potent effect in reducing activation of an inflammatory pathway. Here’s their summary of the results:

That represents a lot of work, and I think that result sounds reasonable and potentially useful — who wouldn’t want another anti-inflammatory compound? But all that stuff about evolution and mental health and the hygiene effect were extraordinarily hand-wavey, and none of that was tested here at all. Which is a relief if my wife comes to me to say I should do some gardening so I could stock up on 1,2,3-tri [Z-10-hexadecenoyl] glycerol, 10(Z)-hexadecenoic acid and be less stressed and grumpy, because I’ll just tell here that the effective dose in a handful of dirt hasn’t been found, the connection to mental health is speculative, and I am not a mouse.