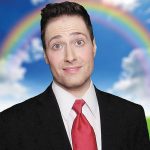 His father’s name was Gerry Rainbow, and they named him Randy. It’s not a stage name. That’s the least of the trivia I learned from this profile of the YouTube star.

I think he’s fabulous, and all of his videos are entertaining…that’s the important thing. He also says he’s not very political, which I can believe. He’s just a normal guy with considerable musical talent who is just expressing a normal, ordinary perspective on the current odious absurdity. Check out his channel if you haven’t already.

Get your hands dirty for mental health? » « Godzilla, king of big dumb fights