This is an opinion published by Fox News, so you already know it’s garbage, but I’ll kick it around for a bit anyway. It’s by a guy named Anthony DeStefano, who claims to have insight into the atheist mind.

There’s no polite way to say it. Atheists today are the most arrogant, ignorant and dangerous people on earth.

We’ve all seen how these pompous prigs get offended by the slightest bit of religious imagery in public and mortified if even a whisper of “Merry Christmas” escapes the lips of some well-meaning but naïve department store clerk during the “holiday season.”

No, that’s not true. Splatter as much religious imagery on your house or your church as you want. But please, the government is here to serve all the people, so the government has no place endorsing a specific sect.

Also, you won’t find many stories of atheists raging at a store clerk saying “Merry Christmas”. That has never been a problem for us. You will, on the other hand, find plenty of stories of some self-righteous Christian raging about a clerk saying “Happy Holidays”.

But really, the War on Christmas? You know this is a totally made-up conflict peddled by the likes of Bill O’Reilly, don’t you?

To cite a few recent examples: Last December, the group American Atheists launched its annual billboard campaign with the slogan: “Just Skip Church — It’s All Fake News.” In February, the American Humanist Association became furious when President Trump had the gall to mention Christianity and Jesus Christ without also mentioning atheists—at the National Prayer Breakfast! (How dare he!) And just this month, the Freedom From Religion Foundation raised holy hell because the Reverend Billy Graham was laid out in state in the Capitol Rotunda before his burial.

Yes? A billboard campaign by an atheist organization is just a publicly expressed opinion. It’s allowed.

If you are so upset that a few citizens expressed a non-binding, secular, unenforceable opinion, why are you so blase about the President using his power and his influence to tell the country that they should pray, and also using the power of the government to honor a Christian mouthpiece?

Yes, these atheists are loud, nasty, unapologetic and in-your-face.

So far, he’s backed that up with an imaginary conflict, the fact that atheists openly say that they don’t believe in church, and that the American government expresses a religious bias. Mediocre!

But while their arrogance is annoying, it’s nothing compared to their ignorance. Atheists believe that the vast majority of human beings from all periods of time and all places on the Earth have been wrong about the thing most important to them. They basically dismiss this vast majority as being either moronic or profoundly naïve. What they don’t seem to know – or won’t admit – is that the greatest contributions to civilization have been made, not by atheists, but by believers.

Atheists do know that they are a minority, and that historically they’ve been an even more minuscule minority. When the majority of people believe in a deity, then we can expect that a majority of believers will have contributed to civilization. This is not a surprise.

But…but…Aristotle didn’t believe in your religion and specifically not in Jesus. Bacon, Da Vinci, and Newton all lived at times when denying Christianity would get you persecuted and punished (which is not to say that they didn’t also have cultural biases favoring belief…and Newton in particular was fervent but weirdly unorthodox). Heck, I was brought up Lutheran, although I repudiated it in my teens — does that mean a demented 16th century anti-semite gets credit for my interest in science? I think not.

And speaking of pioneers of science, who do you think coined the term “scientist” in the first place? William Whewell, an Anglican priest and theologian! He also came up with words “physicist,” “cathode”, “anode” and many other commonly used scientific terms. Essentially, the very language used by scientists today comes from the brain of a believer.

Even the Big Bang Theory itself – which atheists mistakenly think bolsters their arguments against God – was proposed by Fr. George Lemaitre, a Belgian astronomer and Roman Catholic priest! And the father of genetics—which provides the basis for the whole theory of evolution—was Gregor Mendel, an Augustinian monk!

Just about every 19th century English scientist was an Anglican! They probably also ate porridge, too, but we don’t go around insisting that porridge made them great scientists. Or maybe you do. It would make as much sense.

I teach genetics. I imagine everyone who does so mentions a bit of the history, and discusses Mendel specifically as a monk working in a monastery garden. We’re comfortable saying it too, and are fine with the idea that people who believed in God can also do science. Most of our American students are religious, mostly Christian but I also teach Muslims, and we don’t use the classroom to lie about history, which makes this next bit particularly ridiculous.

Yes, the new atheists have an ignorance of history bordering on madness.

You haven’t shown that. You haven’t even made an argument touching on that.

But are they really dangerous, too?

I expect more garbage arguments in defense of that claim.

You bet they are. The truth is, the atheist position is incapable of supporting any coherent system of morality other than ruthless social Darwinism. That’s why it has caused more deaths, murders and bloodshed than any other belief system in the history of the world.

I’m an atheist humanist. I reject social Darwinism. Social Darwinism was avidly endorsed by a great many Christians, you know — it’s a position that can be held independent of one’s religious beliefs.

Atheists, of course, are always claiming hysterically that Christianity has been responsible for most of the world’s wars, but that’s just another example of atheistic ignorance. The main reasons for war have always been economic gain, territorial gain, civil and revolutionary conflicts. According to Philip Axelrod’s monumental “Encyclopedia of Wars,” only 6.98 percent or all wars from 8000 BC to present were religious in nature. If you subtract Islamic wars from the equation, only 3.2 percent of wars were due to specifically Christian causes. That means that over 96 percent of all the wars on this planet were due to worldly reasons.

I have never heard an atheist claim that Christianity has been responsible for most the world’s wars. Was the American Civil War caused by Christianity? Both sides were majority Christian. What about WWI and WWII? I’ve never seen it claimed that those were religious wars at all. I’d agree that most wars have been waged for “worldly reasons”. Of course, you still have to concede that, as most Western scientific discoveries are being credited to Christians, than likewise most of those worldly wars must have been waged by religious believers. You don’t get to claim all the good things in history for godly folk and blame all the evils on an insignificant minority of atheists!

What follows is predictable.

Yes, there is a profound and frightening connection between atheism and death. Atheist leaders like Stalin, Mao Zedong, Hideki To ̄jo ̄, Pol Pot and many others bear the blame for the overwhelming majority of deaths caused by war and mass murder in history. And while many atheists make the preposterous claim that Adolf Hitler was a Christian, his private diaries, first published in 1953 by Farrar, Straus and Young, reveal clearly that the Fuhrer was a rabid atheist: “The heaviest blow that ever struck humanity,” Hitler stated, “was the coming of Christianity. Bolshevism is Christianity’s illegitimate child. Both are inventions of the Jew… Our epoch will certainly see the end of the disease of Christianity.”

Interesting shift. One minute he’s arguing that almost all wars can be blamed on “worldly reasons”, in the net he leaps to claim that’s synonymous with atheism in the last century. To buttress his argument, he claims that Hitler was not a Christian, citing his private diaries. This is bogus. The “diaries” that were published in the 1980s were entirely fake; he must be referring to the “table talk” transcripts. These were not diaries, and they weren’t even particularly complete or accurate transcripts, and they weren’t good sources for Hitler’s state of mind, let alone the goals of the German leadership or the German people. They’re also plagued with a history of bad translations.

[Hitler] was that classic German type known as Besserwisser, the know-it-all. His mind was cluttered with minor information and misinformation, about everything. I believe that one of the reasons he gathered so many flunkies around him was that his instinct told him that first-rate people couldn’t possibly stomach the outpourings.

Hmmm. Sounds like he’d be a natural as a Fox News pundit nowadays.

But even if Hitler were a flaming satanist, it doesn’t change the fact that the German people were almost universally Lutheran and Catholic, and yet they willingly went to war with the world, and many participated in the Holocaust. His public speeches endorsed religion, Mein Kampf is full of religious claims of righteousness, and he had the support of the German Catholic hierarchy.

He goes on longer, but I’m bored now. To be honest, I was bored after his second paragraph. I’ll just point out that the Fox News staff must have gone looking for the most “arrogant, ignorant and dangerous” illustration they could find, and this is what they came up with. 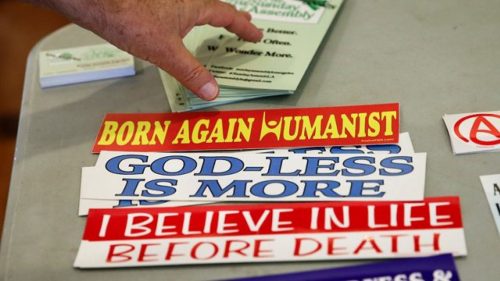