This image illustrates hominin history over 4 million years, highlighting a recent discovery in the Philippines. Is anyone else as horrified by it as I am? 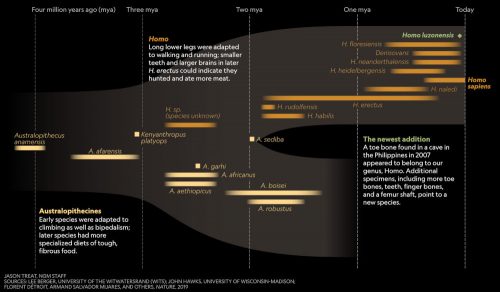 It illustrates 8 species of Homo in the last million years. The fossil record is spotty, so there are probably more…and the record prior to a million years ago is going to be even weaker, and the number of species is going to be even less representative of reality. Our family was a wonderful flowering bush of diversity, and now its been pared down to a single twig, us.

That’s an illustration of failure. We should be worried, especially since we’re actively exterminating even our distant cousins, taking an axe to the whole family tree. We’re working towards only supporting one primate type on the entire planet, which seems a little selfish and short-sighted.

Maybe it was a mistake to name a child after the Norse goddess of winter » « Julian Assange: evidence that a man can be a journalist and an asshole at the same time