It’s one disgusting story after another, now that the Feds have flipped over the rock of college admissions. Deadspin has all kinds of grisly details on how athletics was used as a gateway for cheaters, including lots of face-palming transcripts. 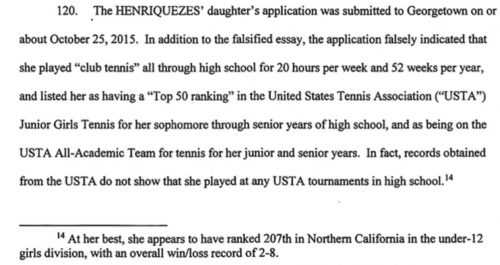 The grift was to pay a coach or program big bucks to lie and say the prospective student was a worthy athlete, which allowed them be admitted under more lax standards.

Why are student athletes given special privileges, anyway?

Shut these programs down. All students should be admitted on their academic potential, not how well they can throw a ball. Fire all the coaches. Make sports a non-competitive extra-curricular activity. Burn the stadiums down. Jesus christ, at the very least we’ve got to make our admissions departments more accountable.

I’m getting a bit worked up reading about this scam. I’m going to have to close up my laptop and go spend some time with my spiders. They, at least, are incorruptible and honest.

Jacob Wohl may have Smolletted himself » « Mood: Eat the Rich