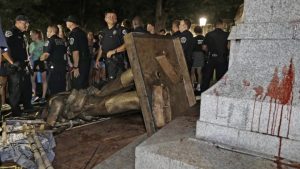 Police stand guard after the confederate statue known as Silent Sam was toppled by protesters on campus at the University of North Carolina in Chapel Hill, N.C., Monday, Aug. 20, 2018. (AP Photo/Gerry Broome)

Silent Sam was a Confederate war memorial at the University of North Carolina, that was dedicated to the Southern students who went to war for the Confederacy. It got toppled. There are many who are trying to argue the usual crap — it’s erasing history! Good people on both sides! The war was about state’s rights, not slavery! — you know, all the usual noise. So let’s unerase some history and go back to the statue’s unveiling in 1913, and the speech by Julian Carr. Carr was a white supremacist who supported the KKK, made his money with tobacco manufacturing, thought lynchings were a praiseworthy event, and was just generally a terrible human being.

His speech is interminable and overwrought, with much praise for the noble and heroic sons of the South who gave their life, and the dutiful and devout beautiful Southern women who supported them. There are poems in it, and classical allusions. I shall skip over those to the parts that are most discordant today.

Look at him, practicing Identity Politics! I guess the Civil War was actually about propping up the superiority of his narrow branch of white people. But then he gets personal.

I trust I may be pardoned for one allusion, howbeit it is rather personal. One hundred yards from where we stand, less than ninety days perhaps after my return from Appomattox, I horse-whipped a negro wench until her skirts hung in shreds, because upon the streets of this quiet village she had publicly insulted and maligned a Southern lady, and then rushed for protection to these University buildings where was stationed a garrison of 100 Federal soldiers. I performed the pleasing duty in the immediate presence of the entire garrison, and for thirty nights afterwards slept with a double-barrel shot gun under my head.

He said that? He was proud of whipping a woman in public?

I talk about macroevolution a little bit » « SWW this weekend