I hate to admit it, but this theory actually makes a kind of sense to me. 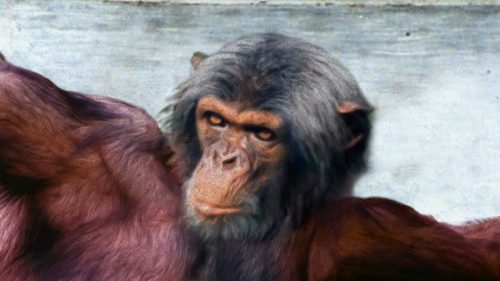 Challenging long-held views on the origins of divinity, biologists at the University of California, Berkeley, presented findings Thursday that confirm God, the Almighty Creator of the Universe, evolved from an ancient chimpanzee deity.

The recently discovered sacred ancestor, a divine chimp species scientists have named Pan sanctorum, reportedly gave rise over millions of years to the Lord Our God, Maker of Heaven and Earth.

“Although perhaps not obvious at first glance, there are actually overwhelming similarities between the Supreme Being of today and this early primate deity who preceded Him,” said Dr. Richard Kamen, a leading biologist who also heads Berkeley’s paleotheology department. “The holy chimp moved around on all fours, but its descendants eventually began walking upright to expend less energy while foraging across the infinite reaches of the universe. This of course led to the bipedalism of modern-day God.”

What’s in the box, Gwyneth? » « Do we really need 4500 words about an unrepentant pedophile?