You might be wondering who that would be, but the answer is right in your face. It’s ME. Yes! According to YouTube comments, which are clearly an unimpeachable, credible source, I am responsible for destroying the atheist movement. Me! And you regular readers of Pharyngula get a mention, too. It’s all our fault. 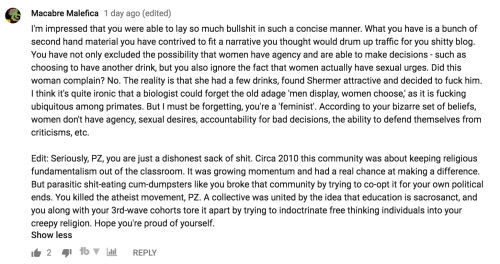 I still get people who are resentful and angry that I published a letter from a woman who was mistreated by Michael Shermer.

I’m impressed that you were able to lay so much bullshit in such a concise manner. What you have is a bunch of second hand material you have contrived to fit a narrative you thought would drum up traffic for you shitty blog. You have not only excluded the possibility that women have agency and are able to make decisions – such as choosing to have another drink, but you also ignore the fact that women actually have sexual urges. Did this woman complain? No. The reality is that she had a few drinks, found Shermer attractive and decided to fuck him. I think it’s quite ironic that a biologist could forget the old adage ‘men display, women choose,’ as it is fucking ubiquitous among primates. But I must be forgetting, you’re a ‘feminist’. According to your bizarre set of beliefs, women don’t have agency, sexual desires, accountability for bad decisions, the ability to defend themselves from criticisms, etc.

Edit: Seriously, PZ, you are just a dishonest sack of shit. Circa 2010 this community was about keeping religious fundamentalism out of the classroom. It was growing momentum and had a real chance at making a difference. But parasitic shit-eating cum-dumpsters like you broke that community by trying to co-opt it for your own political ends. You killed the atheist movement, PZ. A collective was united by the idea that education is sacrosanct, and you along with your 3rd-wave cohorts tore it apart by trying to indoctrinate free thinking individuals into your creepy religion. Hope you’re proud of yourself.﻿

So…I’m the one denying women’s agency, but he gets to assert, against a woman’s own words, that she “decided to fuck him”. He had nothing to do with it, it was entirely the woman’s choice.

I have never heard the “old adage” that ‘men display, women choose’ in a biology class. It sounds so sweet, inocuous, and unreal. Men are just passively trying to look good, no pressure, and women are entirely the active agents in all sexual interactions. I’m sure many rapists use this kind of logic to justify their actions. “She made me do it!”

I also kinda suspect that this guy was never much of a fan of education, or that his participation in the movement was entirely about keeping education “sacrosanct”, or he wouldn’t have dived off the deep end at the mention of the word “feminism”.

I don’t want to leave all you readers out of this. You’re also responsible for the destruction of the atheist movement, you know.

+PZ Myers By helping destroy the atheist movement with your retarded beliefs, you have done more to help creationism than the whole CCP combined. You have no place here, PZ. Leave. Go back to your shitty little blog with your shitty little friends an share a pint of piss while you cry into each others arms about patriarchy and rape culture.﻿

I confess that despite all their assertions I don’t feel like I’ve ever been powerful enough to destroy the movement. It’s still an ego boost, though, that the people who hate me so much are such terrible human beings. I’ve got the right enemies.