One of the major reasons I’m out here on the West coast is for the wedding of my nephew, Ben, to Abi (here with her mother). 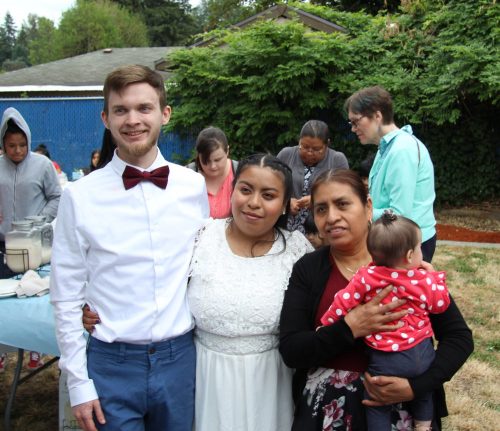 Now I get to tell a story. Many years ago, when I would walk home from school back in junior high and high school, I would sometimes walk with a girl who lived a few blocks from me. My little sister Lisa (Ben’s mother), who was then around 5 to 7 years old, would sit on the front step of our house, and when she would see us, she would sing out, “Paa-aul’s got a girrrl frieeend!” and then run inside giggling. Her magic chant apparently was effective since I later married that girl and am still happily married these many years later.

So I’ll return the enchantment, since Lisa is no longer around to do it for him. “Be-een’s got a girrrl frieeend!”

Now he’ll have many decades of happiness. Guaranteed.