This week dozens of prominent evangelical leaders gathered at conservative Wheaton College, in Wheaton, IL, to address the “grotesque caricature” of their faith in the Trump era. The organizer of the gathering, Doug Birdsall, told the Washington Post that under Trump’s leadership, the term “evangelical” has taken on too many negative associations, especially when it comes to racism and nationalism. The goal of the gathering, then, was to address these concerns while returning the word “evangelical” to its core meaning. Rather than a political pariah, an “evangelical” is simply “a person who believes in the authority of the Bible, salvation through Jesus’ work on the cross, personal conversion and the need for evangelism.”

Nah, that’s not what an “evangelical” is — an “evangelical” is a manufactured identity where the most important part is not the religious side, which is merely used as a prop to signal “purity” and in-group membership, but all the political baggage that has come to the forefront.

This is what “evangelical” has come to mean: a total lack of principle. Corruption. Christianity is the perfect example of a whited sepulchre, to use their own language against them. 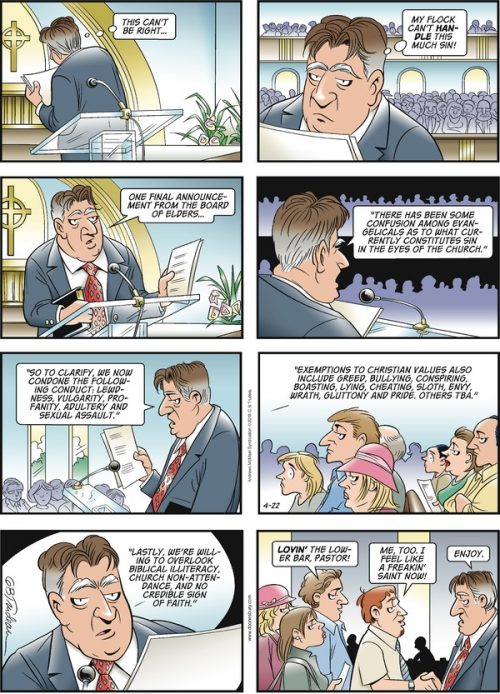 The amazing thing is that it wasn’t atheists who created that image of them — they did it to themselves, no assistance necessary. It doesn’t take a cartoon to caricature these people. 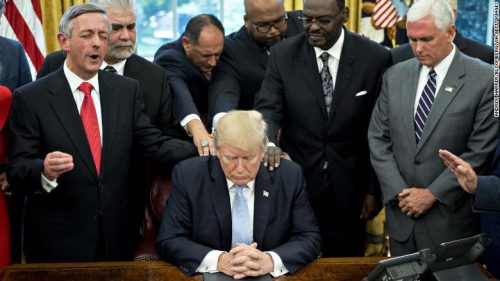 Now some evangelicals are looking for a way out.

If evangelicalism ever wants to play a more positive role in social and political life, perhaps it’s time its leaders acknowledge that its public image isn’t a “grotesque caricature,” but the thing itself. There’s a weighty theological term and disposition for taking an approach that comes to terms with such hard truths but attempts to chart a new path beyond them: repentance. If that doesn’t happen, then Daniel Schultz is probably right: the meeting at Wheaton will not have accomplished much of anything.

Here’s a weighty theological term for you: apostasy. Get out.