Students in Parkland, Florida are now expected to use transparent plastic backpacks, as a way to prevent future mass murders. This makes no sense. 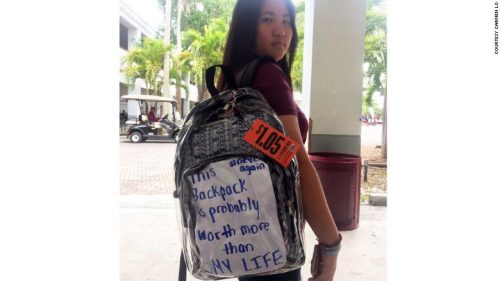 The “$1.05” tag is meant to suggest how much the NRA pays per student to Florida government officials to kill gun laws.

The article goes on to discuss “better” alternatives, like installing metal detectors at all entrances. I don’t get it. These are all pointless superficial measures to avoid addressing the problem at its root, the easy availability of weapons that have no utility other than mass murder. The kids are going to be so pleased that their worth has probably increased by several dollars more: (NRA donations + cost of backpacks + cost other useless measures) / number of Florida students. Yay!