How about this for a revealing graphic? It’s a plot of average salaries for biology majors in a range of occupations, from airline pilots on the left (almost entirely male) to dental hygienists on the right (mostly female), and the gray dots and pink dots connected by lines show the relative salaries for men and women in the same job. Yikes — it turns out that being a gray dot means you get paid more money, no matter whether it’s a “female” job, or a “male” job.

I had to look hard to find exceptions to that rule. Women who are dishwashers or bank tellers get paid slightly more than their male counterparts. I wonder how much they use that biology degree in those jobs?

It’s a chicken-and-egg problem, says Michelle Ball, a career counselor at the University of Virginia. “Do teachers get paid less because the workforce is largely female, or is it that education is just underfunded and women are willing to go into it anyway?” she asked.

I think we can answer that question from the graph: the proportions of men and women in a workforce doesn’t seem to matter at all, women will get paid less. How much less, and how badly screwed are people of color? 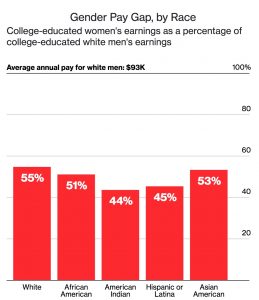 How can we change this? One cause of the difference is that the labor of raising a family falls almost entirely on women’s shoulders. We could fix that by changing the culture and having men share more of that labor (sheeyah, right), or employers could recognize that and adjust their practices to take it into account.

The labor of raising a family, then, is one of the biggest sources of divergent career paths for women and men who attain the same degrees. A recent U.K. study found that universities with generous maternity leave policies employed twice the number of women professors as those without, and a 2009 Center for Work-Life Policy survey found that among college-educated women who had left their careers, 69 percent said that they wouldn’t have done so if their companies had offered more flexible work options.

There are a whole lot of smart, ambitious women graduating from our biology program every year. Maybe employers should think more about what it takes to attract the best and brightest?

Jobs! Biology jobs! » « Who came up with this stupid idea?