In a total coincidence, I woke up this morning and notice a box of old magazines by the bedside that my wife was planning to throw out, and on the very top was the back cover of Free Inquiry, with this advertisement: 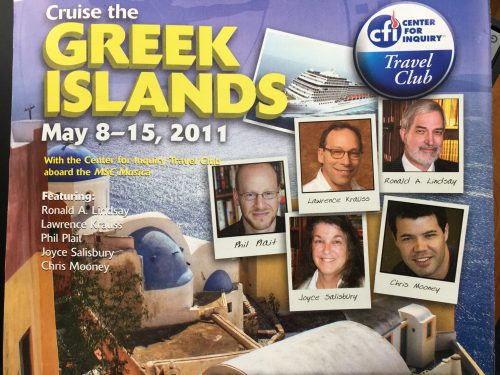 And then, this morning, this article appears: Science Organizations Cancel Lawrence Krauss Events After Sexual Harassment Allegations. Like lightning, within days of the big, thoroughly-sourced article documenting Krauss’s shenanigans, the speaking engagements are sublimating away, leaving nothing but a greasy smear on floor of his reputation. He’s lost the odd event with Sam Harris last night, NECSS has announced that they don’t plan to invite him to future events, MIT cancelled an event, the American Physical Society has dropped him from their annual meeting — he has been Harvey Weinsteined practically overnight.

There are a few exceptions. That infamous cruise:

The BuzzFeed piece also cites an alleged incident in 2011 involving Krauss that I previously detailed in a 2013 post I wrote for the Heresy Club, a now-defunct blog network of young writers in the skeptic community. The blog post, which was removed shortly after its publication following legal threats from Krauss, described a 2011 incident in which Krauss allegedly propositioned a woman to engage in a threesome with himself and another woman (the request was reportedly turned down). The woman was at the time a guest on a cruise sponsored by the Center for Inquiry, where Krauss was one of the featured speakers. I also wrote in my 2013 blog post—and the BuzzFeed article reiterates—that at least one CFI employee implored the then-president of CFI, Ron Lindsay, to not invite Krauss on a planned 2014 cruise, citing the “report of unwanted sexual attention” she had received from the woman and other past offensive behavior. The CFI nevertheless invited him.

CFI has known about these problems as long or longer than other organizations. Nevertheless, CFI has long supported him.

Once, Krauss was barred from making contact with an undergraduate student by his university or from entering the campus without permission, following her harassment complaint, the BuzzFeed article reports. In another instance, the article says, a prominent research institute placed Krauss on its do-not-invite list, following a complaint made during a 2009 event where he guest-spoke. The article also reported that another prominent secular and skeptical organization, the Center for Inquiry (CFI), continued to invite Krauss to events even after having been made aware of several allegations against him and CFI employees requesting that he not attend in light of them.

Universities, like Case Western Reserve, apparently dealt with him effectively after due process (universities are notoriously slow at handling these internal matters). Professional scientific organizations cut him off with remarkable swiftness. CFI, on the other hand, is still struggling to figure out how to cope at least 7 years after the problem first raised its ugly head. The Center for Inquiry doesn’t even have a comment on the matter on their website; neither does the Richard Dawkins Foundation, despite their long association with him.

It’s dismaying that the skeptical/atheist organizations still have their heads stuck up their butts while the rest of the world passes them by. It’s especially troubling because I know there are good people at CFI who are seething about all this, but management has them locked down.