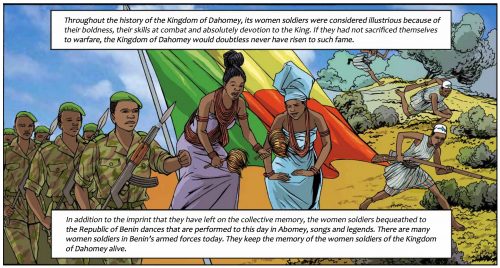 It’s not exactly a pretty story, saturated as it is with slavery, colonialism and war, but it turns out that the Kingdom of Dahomey maintained an elite force of warrior women, the N’Nonmiton, in the 19th century. The comic book linked above tells their story, and these were definitely not put on for show — they were an active fighting force.

The Dahomey Warriors were known to be especially skillful, competitive, and brave. Their drills and military parades were always performed to dancing, music, and songs and their weapons were sometimes used as choreographic props. As expressed in their songs, their goal was to outshine men in every respect, and European travelers observed that they were better organized, swifter and much braver than male soldiers. As such, the King would send them to war as opposed to their male counterparts and European soldiers would also hesitate to kill them as they were often young women.

More details at the Smithsonian.