For the past few days (and wrapping up today) I’ve been at the Science Museum of Minnesota as one of a team of advisors helping them on a future interactive exhibit on evolution, which I’m not going to tell you about, except to say that they have an ambitious schedule and maybe you’ll get to see it as early as this summer. One of the things we had to do yesterday is introduce ourselves with a 5 minute talk about what we can contribute to the project, and so I threw together a little something about my background and my experience as a teacher, yadda yadda, and because I could, I put up an illustration on YouTube to play on the screen behind me — so I used this one, which is just a general time-lapse of zebrafish development.

You have to picture me standing at the lectern, saying something like, “…and this is the experimental animal I work on”, clicking on the play button, and turning to wave gracefully at the screen…and discovering that YouTube had inserted an ad at the beginning, and that what I was pointing at was a shirtless, hunky, muscular man flexing and saying something about an exercise or diet program, I don’t know, because I was busy clicking on the “skip ad” button.

Now everyone has a much more exciting impression of my research.

Aside from that little misstep — do not trust YouTube to serve up your sober, serious videos — it’s been an enlightening experience. My colleagues here have an eclectic mix of skills, with theater people, professional game designers, and museum directors all contributing to the construction and critique of this coming exhibit. Our evenings have been spent playing games, looking for ideas that could be used to involve and inform the general public.

I have been introduced to escape rooms. I did not have the slightest inkling these even existed until this weekend. I guess I’ve been totally out of it, and you’re probably going to tell me you’ve been doing these for ages, and make me feel old.

Anyway, for my fellow old codgers, escape rooms are a big booming business right now. The idea is that someone designs an elaborate series of puzzles in a locked room — you have to figure out a hidden code with clues in the room to find a secret switch that opens a concealed door that leads to a room with more puzzles that then fit with clues to reveal more puzzles, for instance, and if you solve them all within a certain time limit you are allowed to escape, or discover the murderer, or save the world, or something. They seem to be hugely popular — a search for Minneapolis escape rooms reveals they’re dotted all over the map.

And now, I’ve gone from a state of total ignorance to having played 3 escape rooms at the Science Museum’s expense. 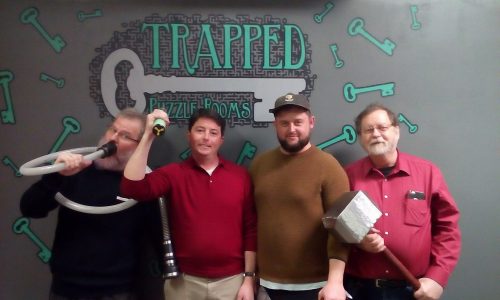 I’ve learned many things this week — if you want to teach people about science, it’s helpful to listen to theater people and game designers, and it’s good to get away from the model of telling people what the answer is to instead have them figure it out for themselves. Also, escape rooms are kind of fun.