Rodrigo Duterte, president of the Philippines:

Addressing a group of former communist rebels on Feb. 7, Duterte, who served as a city mayor before becoming president, appeared to encourage Armed Forces of the Philippines (AFP) to target women in conflict.

“Tell the soldiers. ‘There’s a new order coming from the mayor. We won’t kill you. We will just shoot your vagina,’” he said.

“If there is no vagina, it would be useless,” he continued, appearing to imply that women are useless without their genitals, according to local media reports.

“We’ve had a great relationship,” Trump told reporters, sitting with Duterte at the start of the bilateral meeting. “This has been very successful.” He praised Duterte’s handling of the summit and said, “I’ve really enjoyed being here.”

As Trump pivoted to talking about the nice weather in Manila, Duterte cut off the American reporters who tried to press Trump on human rights.

“Whoa, whoa,” he protested. “This is not a press statement. This is the bilateral meeting.”

Duterte at one point called reporters “spies,” prompting Trump to chuckle. “You are,” Duterte repeated. 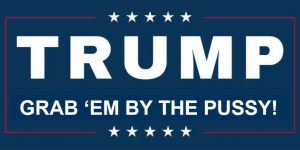