Pope Danny Ray Johnson was a blustery, cocky, unpleasant dude: a racist, Confederate-flag-wavin’, Bible-thumpin’, struttin’ caricature of a certain kind of toxic Southern masculinity. Of course he had a church — the kind of church centered around a cult of personality, where the pastor could call himself Pope (and have a hat that spelled out “POPE” on it), where the choir would pose with their guns on display, where Rebel flags hung from the walls, a church with a bar (which isn’t a bad idea…) but no liquor license, but they’d try to get away with selling alcohol with the excuse that it was for communion. Johnson was happy to post memes to Facebook calling the Obamas “monkeys”. That’s just the kind of good ol’ boy he was. He also got elected to the state congress of Kentucky, because that’s the kind of horrible person who can get elected in the benighted counties of the regressive South.

Oh, and he was also a child molester. I’ve put the 17 year old victim’s account below the fold, because it’s a bit detailed and unpleasant, and the story just gets worse and worse.

That night, she woke after settling in on the sofa. She was groggy, unfocused. But she saw Johnson kneeling above her. He gave her a kiss on the head. She thought it fatherly, nothing out of the ordinary, simply one last goodnight gesture.

Then he started to stroke her arm. He slid his hands up, under her shirt and bra, and groped her. He stuck his tongue in her mouth. Then, he forced his hands down her pants, underneath her underwear, and penetrated her with his finger.

She begged her pastor to stop and tried to force him off, quietly. She remembers not wanting to awaken Sarah. But Johnson was a big man, roughly twice her weight.

He told her she’d like it. She said no, she didn’t. She pleaded with him: go away, go away.

She lay on the sofa for hours, those moments running through her head, over and over. She remembers feeling frozen.

“Every little sound that I heard I was terrified that it was his door opening up and he was coming back out,” she said.

And now Johnson is dead. He killed himself in a bizarre frenzy of denial, recriminations, guilt, and God. He left behind a suicide note on Facebook. 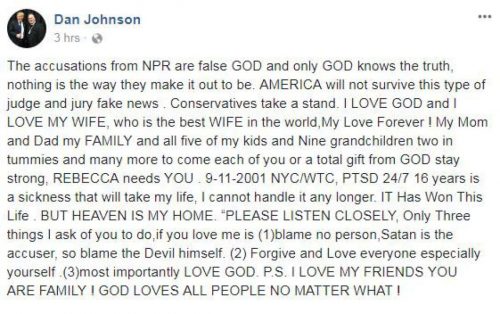 The accusations aren’t from NPR, but from the young woman he assaulted. “Fake news” seems to be the rallying cry of every conservative whose offenses have been outed. It’s nice that he proclaims his love for his wife and family before dropping his bloody corpse into their lives, but I think there are better ways of demonstrating that.

I have no idea why he’s babbling about 9/11 in a suicide note. He wasn’t there. He claimed to have been doing rescue work in the aftermath of the terror attack, but no one remembers seeing him there, and all he’s got are some celebrity shots with people like Giuliani — and that he somehow managed to wangle workmen’s compensation from the state of New York. So he’s one of those stolen valor guys, and also a deadbeat grifter.

It’s really hard to feel any pity for him.

By the way, before you start pointing out that he’s a suicide, so he can’t go to heaven — the Christian Bible is a complicated mess on the subject. There aren’t any explicit threats about being damned if you commit suicide, but only vague and ambiguous statements about your life being in the Lord’s hands, which is interpreted to mean that you will be punished if you don’t let God decide your fate…but you’d think then that it would be even more furiously against people who kill others, but there’s a lot of genocide and murder in the book.