Oh, look. It’s a row of scrota marching to demand the right to fill your uterus. 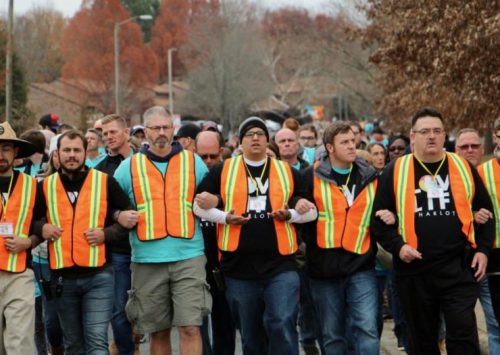 Over a thousand sanctimonious assholes marched around an abortion clinic in Charlotte, North Carolina, shouting and waving signs and doing their best to intimidate and suppress women’s access to health care. Despite the noisy zealots, though, the clinic remained open.

Clinic staff considered it a victory that it remained open despite the thousands of anti-choice activists, the large police presence, the large sound systems not just at the clinic but also a quarter of a mile up the drive, and the buses shuttling LLC attendees from parking lots to the rally site and back again. But there is little doubt that as many as 20 patients were unable to access an abortion that day simply because they were too confused, too overwhelmed, or too scared to navigate the sea of barricades, officers, and teal-shirted anti-abortion activists—even if those activists were primarily doing nothing but silently walking and praying.

“We have no-shows and drive-bys that happen on a normal day, with 10 to 15 protesters,” said Anders, the clinic escort organizer. “They circle around a few times and drive away, and I’m sure it was a patient who didn’t want to come in, who was intimidated and didn’t want to talk to these street preachers. Today, I can’t imagine.”

“Access is being impeded by groups who come down these small side streets and swarm these clinics, putting them under siege, which blocks access for patients and also confuses patients who don’t know if that clinic is open,” said Jen Ferris, Progress North Carolina, a progressive liberal policies action group out of Raleigh that is working with the clinic. “People should be able to access clinics without fear of harassment.”

Can we get something clear here? This is not free speech. It’s abusing the right to peaceably assemble to instead blockade and impede someone else’s rights. And a big part of the problem is the goddamn city of Charlotte, which refuses to recognize the tyrannical character of the shrieking protesters’ transparent assault on the liberty of others.

Ferris suggests that one thing the city should do to ensure patients don’t face similar situations is to stop issuing parade permits like the one it issued today. “Today they gave a permit for 5,000 people to come down this small street,” she said. “You can see traffic is backing up. They could stop issuing sound permits. You can hear this inside the clinic and there is no reason a patient needs to hear religion shouted at them while they sit inside a clinic.” Rewire has previously reported on noise levels outside of the clinic and the inadequate response of city officials in addressing them.

The city of Charlotte is aiding and abetting anti-woman offenses against humanity. I guess that’s fine with the city administration, so clearly, they need to go.

Quit playing the fool, guys — you’re hurting our reputation » « How do you fight madness?