The other day, he tweeted something from a site called MAGAPILL, because they’d posted something praising him for his ‘accomplishments’. Here’s what else MAGAPILL endorses. 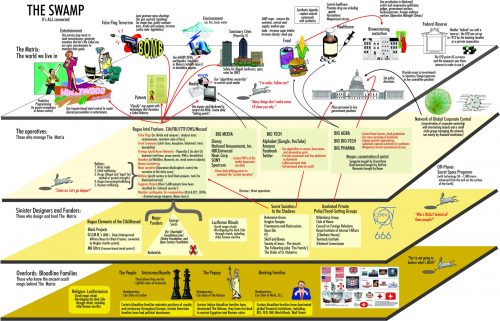 It’s an astonishing expression of paranoid insanity. You can get lost in all the bizarre details.

We have off-planet secret space programs. CERN is somehow tied to 666? Bilderbergers, Knights Templar, and Luciferian Rituals. George Soros. What is it with George Soros? I don’t know anything about Soros. To me, he’s an old guy with an undeservedly large fortune, just like all the other rich fucks, nothing more. That he sometimes endorses progressive causes doesn’t seem to warrant the foaming-at-the-mouth hatred he gets.

I’m also bewildered by the fondness of MRAs and Nazis for an old Keanu Reeves movie. Why all the Matrix allusions? It’s really strange that the fascists of today saw a movie by Lilly and Lana Wachowski and decided that yes, that was the uniform for their movements.

Everything about these guys, Donald Trump included, simply screams warped and dangerously demented perception of reality. And they’re running the country? Goddamn.

If you really want to zoom in on that mess, here’s a link.