I can hardly believe how brave she is. Would you believe she actually sells psychic vampire repellent? 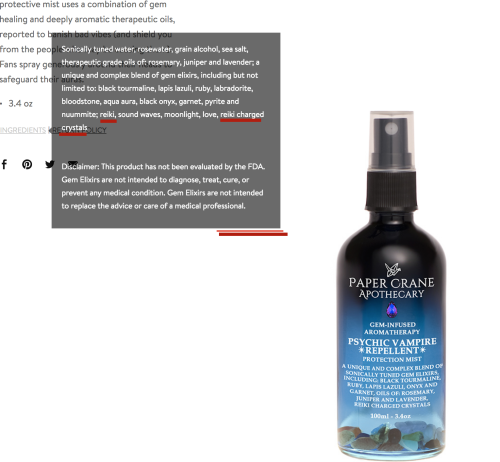 If it were me, I’d be afraid to stock something that would repel or destroy me, and I sure wouldn’t be selling it to people, not even for an outrageous $30 for 100ml, who might spritz me with it. Especially not when it’s been infused with such dangerous things as moonlight and reiki.

The psychic vampire repellent may not be FDA evaluated, but who cares when it has sonically tuned water, moonlight, love, reiki, and gem elixirs which is totally not left over water from a rock polisher. It must be very potent as there is a double dose of reiki. I’m not sure how they get all that reiki in the bottle because reiki isn’t an object but no conversation needed here because ancient gem elixir physics, duh! One should spray it around one’s face to “safeguard” one’s aura and “banish bad vibes (and shield you from the people who may be causing them).” I mean that’s some potent, women empowering health shit right there, you know? Just don’t empower it into your lungs.

I’m assuming that Psychic Vampires are real, because no way would Gwyneth sell a fake remedy to a fake problem. That would be, like, a double-fake. Which confuses me, because wouldn’t a double-fake mean it’s real?

Also, it’s obvious that Gwyneth herself is a psychic vampire. She’s leeching the minds out of people.