I’m not particularly fond of circular logic, but it sure gets used a lot. Here’s an example: there are more men working in tech than women, therefore men are better at coding than women. It’s easy to find people who accept that reasoning without a qualm.

But those same people balk at another example: more women than men are getting published in science fiction now, therefore women are better writers than men. They go to extraordinary lengths to rationalize away the current difference. Why, the SJWs must be actively discriminating against men! I can prove it using math, because men are also naturally better at math than women!

I have found the most remarkable example of this “proof”. This fellow has gone through back issues of various magazines and tallied up the number of male and female authors published — and also the number of “not real sex” authors, which sort of tells you right there what kind of regressive asswipe we’re dealing with. He comes to the conclusion that there’s a huge discrepancy in the numbers of F&SF stories getting published by men and women, and that it’s the product of a conspiracy by SJWs to actively harm men. Really!

It’s been obvious for a long time in publishing that men need not apply, you’re not welcome. But now in the 2% where men were actually allowed to compete, it’s been completely taken over by social justice warriors who don’t care in the least about equality, but want to actively harm men both as professionals and readers.

In order to demonstrate this, he engages in some amazing cherry picking and distortion of the statistics. He plugs numbers into a spreadsheet and then does some weird analysis. For example, here’s the month-by-month counts for a podcast, the Escape Pod. The thing is, there are huge numbers of podcasts out there — why is he selecting this one? Is he going to exhaustively summarize the state of the podcast genre (no, of course not, because that would be a huge undertaking), or is he selecting this one because it will support his claim? You know it’s the latter. I looked it up, and here’s one of the criteria for entries in the podcast:

We are especially interested in seeing more submissions from people of backgrounds that have been historically underrepresented or excluded from traditional SF publishing, including, but not limited to, women, people of color, LGBTQ or non-binary gender people, persons with disabilities, members of religious minorities, and people from outside the United States.

If you identify as part of these or other underrepresented groups, we welcome and encourage you to indicate so when you send us your story. We acknowledge the reality of unconscious bias and will make our best efforts to account for it during the editorial review process. Our goal is to publish fiction that reflects the diversity of the human experience.

So yes, they intentionally are casting a wide net, and are trying to bring in diverse writers. They aren’t discriminating against men at all.

So let’s see the numbers. 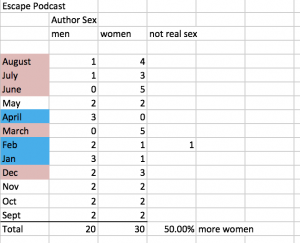 So a podcast that is actively encouraging diverse submissions still includes 20 stories from men, vs. 30 stories from women. That’s not bad at all. But wait: what’s that number? He’s saying that there are 50% more stories by women than men? That’s odd. How does he get that?

And then there’s this interesting table: these are the long-standing big names in SF publishing: Asimov’s, Analog, and F&SF. There are more men getting published in the established magazines than women! You would think this would be a troubling statistic for his thesis. 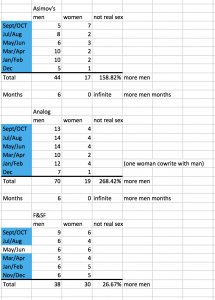 So magazines that encourage diversity in their authorship get fewer submissions from men, which is totally unsurprising. What is odd is that a couple of magazines buck the trend. Why? Our intrepid investigator has an explanation.

The oldest of the old guard of magazines still seem to be a safe place to submit if you’re a man. Now the numbers look very skewed in men’s favors and a feminist might cry foul here saying that these magazines actually discriminate against women. This is where they’re wrong. A source that will remain nameless told me that the editor of Asimov’s, Sheila Williams, prints male to female stories in the ratio of submissions she receives. Even though the monthlies look a little suspect, if these periodicals still work in an old way of proportionate representation of submissions, this is probably an accurate picture of what Science Fiction authors make ups are overall, and what one should expect were that more the case.

Uh, wait. This is actually a bit bothersome. I expect the role of the editor is to select the best quality stories for publication, without regard for the identity of the author. This guy is actually saying that this is not true for Asimov’s — that they have a quota system. If 60% of the submissions for that month are from men, they decide that, regardless of quality, 60% of the published stories for that month have to come from that pile? So all the guys have to do is throw lots and lots of trash at the magazine, and they’ll effectively squeeze out stories from women authors?

Excuse me, but I don’t really believe that. If true, though, that works both ways, and all the women have to do to break the male hegemony at Asimov’s is to submit, submit, submit stories. Fish the crappy stuff out of the wastebasket and send it in anyway — it probably won’t get published, but it will enable more of your sister writers to get in.

Which is why I don’t believe this story.

But then take a look at his conclusion.

If you’re a man, even with the skewed results of the legacy three magazines of Asimov’s, Analog and F&SF, that are vocal about the fact that they’re proportionate in representation of submissions, you’re hosed. An analysis of all the markets that accept these submissions on a monthly basis (I left out Lightspeed Magazine which has dead even results), the total discrimination against men is big. The totals of all stories published in this market survey over a year are:

Which means women have a 14.3% advantage just in sheer numbers of stories published. If the industry holds with ratios of 4:1 submissions, and say the accepted represents about 1% of all submissions, it means there’s about 91,300 submissions in the industry. Rough estimates puts men at 73,040 submissions and women at 18,260 submissions.

First look at that bit I highlighted: he threw out a data point because Lightspeed Magazine happened to have equal representation of men and women authors — that is, he discarded data that didn’t fit his hypothesis. You don’t get to do that! He doesn’t even seem to be aware that this is a great big flaming no-no in data analysis. Of course, given how he chose to inflate numbers throughout, it’s not surprising that he’s clueless here.

Second, he’s claiming that discrimination against men is big, yet all he’s got to show for it is a difference of 426 to 487? What’s the statistical significance of that? Wait, scratch that: his methodology means that at best he’s confirming a bias he favored with his process, which isn’t particularly interesting. He intentionally selected magazines that are trying to acquire a diverse audience, so of course he sees some underrepresentation of men. It doesn’t say there’s a conspiracy, or that men are being harmed.

Third, to amplify his claim of discrimination, he brings in this other statistic: men submit more stories than women with a ratio of 4:1, so there’s even more invisible bias! To back up that claim, he mentions a submissions tracker and market database called The Grinder. I poked around in there, but didn’t see a way to pull up stats on women’s vs. men’s submissions — maybe someone could explain how you do that. But the thing is that in his one specific example of Asimov’s, Analog, and F&SF, he claims that the proportion published is representative of the proportion submitted, and it’s nowhere near 4:1. I also rather suspect that those magazines that encourage submissions by underrepresented groups also tend to get relatively fewer stories from your traditional white male engineering types, so the 4:1 doesn’t hold.

But given that 90% of everything is crap, I don’t find submission rates to be particularly compelling, so that line of argument is also crap.

But here’s my bottom line: of course there is bias! It’s everywhere! Some places will favor women, others will favor men. Go to your supermarket and look at the magazine racks: there are magazines “for men”, and magazines “for women”, and they tend to propagate some ugly stereotypes. In a field like science fiction that tends to encourage innovation and change, and that like all literary fields goes through waves of new emphases, there will be times when people are trying to shake up the old staid tropes, and that means that the previous beneficiaries of convention will fall out of favor, and will find it harder to publish. People are looking for new twists and interesting ideas in their fiction, and of course if you want to write stories exactly like the ones you read 30 years ago, you’re going to be discriminated against.

Really, I don’t choose my preferred reading material by the color of the author’s skin, or what genitals are slung under their pants. I read Nnedi Okorafor, or Scott Lynch, or Ann Leckie, or NK Jemisin, or China Mieville, because they challenge me with new ideas and good writing. Sometimes to get new ideas you have to encourage new perspectives, which tends to disrupt the Old Guard.

But here’s another factor that influences what authors I favor. The good ones (even the white male authors!) will read those new authors, too, and praise what they like and grow and change themselves to value those novel approaches, and their writing will get better.

The bad ones will read stories by authors different from themselves and resent it, and run away from the challenge, blaming others for their lack of adaptability and talent.

But don’t worry, White Men! You’re just as capable of writing great stories as people who are not White Men, as long as you don’t get tangled up in your persecution complex.

The terrible Molyneux gets another drubbing » « Buddhist atrocities