I hate this study already. Some psychologists attempted to develop a psychological profile of the alt-right by interviewing them and using a questionnaire. Fine. There’s nothing unexpected in their results.

A lot of the findings align with what we intuit about the alt-right: This group is supportive of social hierarchies that favor whites at the top. It’s distrustful of mainstream media and strongly opposed to Black Lives Matter. Respondents were highly supportive of statements like, “There are good reasons to have organizations that look out for the interests of white people.” And when they look at other groups — like black Americans, Muslims, feminists, and journalists — they’re willing to admit they see these people as “less evolved.”

It’s that last bit that bugs me. One of their questions primed them with a bad pseudoscientific image, and then asked them to rate various groups of people on how “evolved” they are. 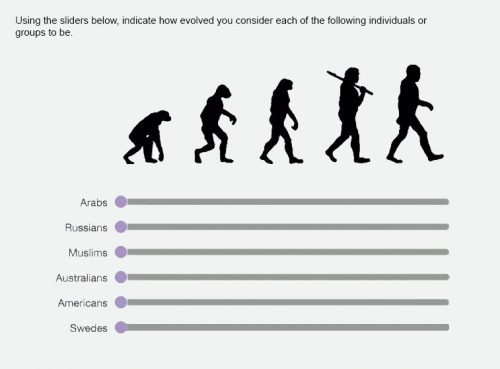 That question makes no sense. It starts by leading people to think an invalid, linear model of progressive evolution is scientifically reasonable, and then asks them to indulge in rating human beings. It doesn’t surprise me that Nazis are willing to dehumanize, but is it fair to miseducate in the process of figuring that out?

Here’s the average of the answers they got. 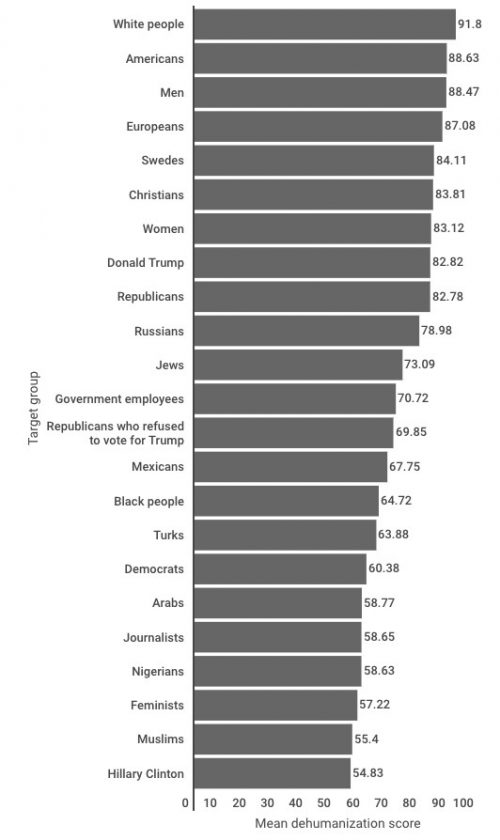 If they’d asked me this question, I would have slammed every slider straight to 100%, and then aborted the whole survey and told the investigators that their methodology was poisonous. But that’s me.

They’re trying to measure dehumanization, and I can appreciate that this might be an effective way to do it, but really, do we need to spread more misinformation in the process? They got a strong distinction, but I’m also annoyed by the comparison group.

The comparison group, on the other hand, scored all these groups in the 80s or 90s on average. (In science terms, the alt-righters were nearly a full standard deviation more extreme in their responses than the comparison group.)

How can you be 80% evolved? How can you even argue that different groups of Homo sapiens are “evolved” to different degrees? None of this makes any sense.

Although the result that Trump’s favorite Nazis think he is less evolved than women in general has got to burn.

Also, they determined that racists are not more economically stressed than other people. They are just goddamned racists. No surprised there.

President’s Committee on the Arts & Humanities to Trump: Resign » « I think xkcd made a comic just for Mano!